Pilgrims cheered, sang and wept as a giant wooden cross serving as the symbol of a Roman Catholic youth festival led by Pope Benedict XVI sailed into Sydney Harbor on Monday, the culmination of a yearlong journey through Australia. 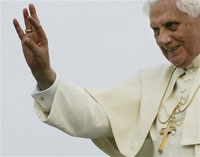 A ferry carrying the 12.5-foot (3.8-meter) World Youth Day cross and Icon of Our Lady, a copy of a painting portraying Mary and Jesus, glided past the city's iconic opera house while pilgrims on board waved to those on shore.

Hundreds of faithful gathered on the wharf burst into applause and belted out Australia's unofficial anthem, "Waltzing Matilda," as the boat docked and the cross was carried off the ferry for a procession through downtown Sydney.

Pilgrims lunged forward to touch the cross as it passed.

"It's a very exciting moment," said Sydney Auxiliary Bishop Julian Porteous. "I think at this moment, everyone is saying the journey is complete."

Benedict, 81, arrived in Sydney on Sunday but is resting from the long flight before joining the festivities on Thursday. World Youth Day, which begins Tuesday and runs through Sunday, is expected to attract more than 200,000 participants and is the largest public event in Australia since the 2000 Olympic Games.

Airports at the biggest cities are jam packed with pilgrims flying in, and buses and trains were bringing more overland to Sydney. Thousands of young people are staying in churches and school houses or in volunteers' homes.

Benedict has raised expectations that he will apologize directly to victims of past clergy sexual abuse while he is in Australia, telling reporters he will do everything possible to achieve "healing and reconciliation with the victims." Activists in Australia have demanded the pontiff make a formal apology.

Benedict also signaled he will discuss the need to face up to the "great challenge" of caring for the environment, noting that global warming is an issue worrying many young people.

The pope said, however, that he would stay out of the political debate on what to do about climate change. His host, Sydney Archbishop Cardinal George Pell, was asked about the issue Monday and said he doubted humankind was causing the problem.

"I'm a bit of a skeptic about the claim that human activity is likely to produce a man-made catastrophe," Pell told reporters.

He also said the church in Australia had apologized to clergy abuse victims a number of times, and was still struggling to help them heal. "That's the most important thing. Counseling, help, justice," Pell said.

Thousands lined the sidewalks, snapping photos and waving. Linda Wilkins raced down from her office so she could place her hand on the cross.

"It means everything to me - it's the symbol of my faith," said Wilkins, 55, of Sydney. "To touch it makes me feel I was an integral part of it."

Benedict's predecessor, John Paul II, gave the cross to the youth of the world in 1984 to be carried across continents as a symbol of Christ's love for humanity. The cross, which has visited 400 communities in Australia, will spend Monday night at Sydney University before being featured at a Mass opening the festival Tuesday.

The cross and icon were brought to a downtown park, where some pilgrims, overcome by emotion, clung to each other and wept. Hundreds lined up to kneel before the cross, place their hands on it and pray.

Stephanie Luna, who arrived in Sydney on Sunday from the United States with members of her Laredo, Texas, diocese, leaned against a lamppost and stared at the cross, tears streaming down her face.

"We're homesick and we're exhausted, but it's a sacrifice," said the 18-year-old, who helped carry the cross through Sydney. "It was so beautiful."

Meanwhile, three members of People for the Ethical Treatment of Animals who protested topless outside a Kentucky Fried Chicken franchise were arrested. A police spokesman said the activists were arrested for "offensive behavior," and not for violating a new law against doing anything considered "annoying" to World Youth Day pilgrims.

The pope is expected to make an important address before large crowd on Thursday, then tour through Sydney in the popemobile. The festival will culminate in a papal Mass on Sunday.