While keeping the military option on the table, the George W. Bush administration is counting heavily on diplomacy including direct talks with Tehran as the best way to wean Iran away from building nuclear weapons. 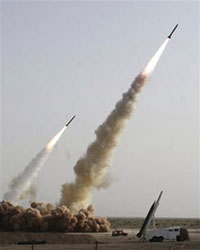 Iran's missile tests evidently included one long-range weapon that could decimate Israel and American military facilities in the region if fitted with a nuclear warhead. The tests brought a relatively calm response from the U.S., at least initially, with the White House calling on Iran to refrain from any more tests.

Secretary of State Condoleezza Rice and Defense Secretary Robert Gates said the tests were more evidence of the need for the U.S. missile defense system. Rice later sharpened her language Thursday, warning Iran that the United States will not back down in the face of Iranian threats against Israel.

The Pentagon, meanwhile, studied intelligence to try to determine exactly what Iran launched and to gauge its missile capabilities.

Testifying to congressional committees, Undersecretary of State William J. Burns said the United States would go ahead jointly with Russia, China, Britain, France and Germany to promote a deal to trade one suspension for another.

That is, if Iran suspended uranium enrichment, harsh sanctions pressing on the Iranian economy would be suspended as well.

Also, Rice would join officials from the five other countries in direct talks with the Iranians.

Sen. Joseph R. Biden Jr., the chairman of the Senate Foreign Relations Committee, suggested that should be followed by one-on-one talks between the United States and Iran.

Burns did not respond directly to the Delaware Democrat's proposal, but he stressed through a long day of testimony to the Senate Foreign Relations and House Foreign Affairs committees that "we are committed fully to using all diplomatic tools."

The seasoned American diplomat who holds the No. 3 post in the State Department also recited the now-familiar warning that "we view force as an option, but a last resort."

However, he stressed the gains Iran could score by suspending enrichment, which Burns said Iran has not perfected yet. These include supplies of civilian nuclear fuel, agricultural assistance and peaceful exchanges of students.

The European Union's foreign policy chief, Javier Solana, will meet with Iranian officials within a few weeks, Burns said. He said an exact date for the pivotal session had not been set.

The stress on diplomacy illustrates how far the administration has traveled after stiffly resisting all but occasional and limited diplomatic talks with Iran on Afghanistan and a few other issues.

But the potential significance of the missile tests was not ignored. Burns called them "disturbing and provocative" and told the House committee: "Iran reminded us again today that it is moving ahead with a missile system which could be used to deliver a weapon."

Rice, traveling in Sofia, Bulgaria, called Wednesday's tests "evidence that the missile threat is not an imaginary one."

It will remain unclear how significant the tests were until they are fully analyzed, said Defense Department officials who spoke on the condition of anonymity because they were not authorized to discuss publicly the ongoing assessment.

Analysts said an early assessment showed that U.S. tracking systems detected seven missile launches, including a version of Tehran's longer-range Shahab-3, which officials have said has a range of 1,250 miles (2,000 kilometers). Intelligence analysts were studying data from radar, satellites and other tracking systems to determine the distance it traveled, look at its accuracy and so on, one official said.

Gates said he hadn't been informed whether the test showed a capability beyond what the U.S. already has seen from Iran.

Nevertheless, he said: "I think this certainly addresses the doubts raised by the Russians that the Iranians won't have a longer-range ballistic missile for 10 years to 20 years.

"The fact is they've just tested a missile that has pretty extended range," Gates said.

Meanwhile, estimates vary on how long it would take Iran to build a bomb.

An unclassified summary of the report, known as a National Intelligence Estimate, said Iran could resume a weapons program and might evade detection if it did.