Mongolian police cordoned off part of the capital's downtown Wednesday in a four-day emergency declared after protesters rioted over allegations of fraud in weekend elections. At least four people were killed in the violence, state TV said. 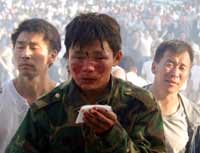 President Nambaryn Enkhbayar's decree allows police to use force in dealing with thousands of rock-throwing protesters who clashed with police officers on Tuesday as they mobbed the Mongolian People's Revolutionary Party (MPRP) headquarters and set it on fire.

A small group of demonstrators gathered Wednesday afternoon in the city's main square, and police used megaphones to tell them to leave and warned that force would be used if they didn't.

A Foreign Ministry official confirmed a state television report that four people died in Tuesday's violence but would not give her name because she was not authorized to speak to the media.

She said about 1,000 people had been detained and about 130 police and protesters were wounded during the melee where officers used tear gas, rubber bullets and water cannon to beat back rioters wielding bricks and iron rods.

State television, the only station allowed to broadcast since the protests, showed two bleeding young men running into a hospital and said they later died.

The station showed footage of burned and overturned cars and the charred four-story MPRP building. It said looters grabbed paintings from an art gallery and televisions from government offices during the protests.

Early Wednesday, a four-block area around the MPRP building was cordoned off, but public transport, official cars and pedestrians were still allowed through. Shops were open and people were walking around.

"Police will use necessary force to crack down on criminals who are looting private and government property," said Munkhorgil, the minister of justice and home affairs, who like some Mongolians goes by one name. The capital was also placed under a 10 p.m. to 8 a.m. curfew, he said.

According to preliminary results, the MPRP - which also governed the country when it was a Soviet satellite - won 46 seats. That easily gives the party far more than half of the 76 seats in parliament, called the Great Hural. Official results were set to be announced July 10.

Fraud allegations were vague and originally centered on two districts in Ulan Bator that were awarded to the ruling party but were contested by two popular members of the Civic Movement party.

Protesters later called the entire election into question, with opposition Democrats saying that their party won the poll. Voters stood in long lines Sunday to cast their ballots in an election that focused on how to share the country's mineral wealth. Many hoped the vote would improve their lives in the landlocked, mostly poor country sandwiched between China and Russia.

The MPRP has long been dogged by allegations of corruption and misconduct by officials and is unpopular in the capital.

The president, a member of the MPRP, acknowledged the protesters' complaints over results of the election but appealed for calm.

"Let's sit down and solve the election fraud," Enkhbayar said on national TV.

The speaker of the parliament has called a meeting to address the allegations, but it is not known when that will be. Many members live in rural areas and will have to travel back to the capital.

Protesters also attacked the General Election Commission offices Tuesday night, demanding that officials resign over the alleged voting irregularities. The commission defended the vote, but at least one party called for a re-count in some districts of Ulan Bator.

"The Mongolian people voted for democracy and not for the MPRP, who are ex-communists," said Magnai Otgonjargal, vice chairman of the Civic Movement party.

Mongolia is struggling to modernize its nomadic, agriculture-based economy. The government says per capita income is just US$1,500 a year in the country of about 3 million people spread across an area about three times the size of Spain.

The two main political parties focused their campaigns on how to tap recently discovered mineral deposits - including copper, gold and coal - but disagreed over whether the government or private sector should hold a majority stake.

The MPRP wants the government to hold the majority stake, while the Mongolian Democratic Party says private Mongolian companies should be able to hold it.