US ship brings thousands of tons of food to North Korea

A U.S. ship carrying thousands of tons of food aid arrived in North Korea after the impoverished nation agreed to open up to widely expanded international assistance, the U.N. food agency said Monday. 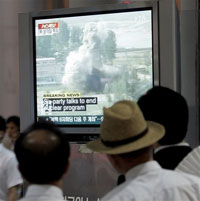 US ship brings thousands of tons of food to North Korea

The World Food Program said the American ship that arrived Sunday carried 37,000 tons of wheat, the first installment of 500,000 tons in promised U.S. aid that will be distributed by the U.N.

The U.S. aid was not directly related to the ongoing nuclear talks between Washington and Pyongyang, and U.S. officials have repeatedly claimed they do not use food for diplomatic coercion.

But the shipment arrived just days after the North delivered a long-delayed atomic declaration and blew up the cooling tower at its main reactor site. In exchange, Washington has lifted some economic sanctions against the North and said it would remove the country from a U.S. State Department list of state sponsors of terrorism.

The North's government agreed to the new aid program Friday, WFP spokesman Paul Risley said. That was the same day Pyongyang blew up the reactor tower following the U.S. concessions.

The American food supplies will help the WFP expand its operations to feed more than 5 million people, up from the current 1.2 million North Koreans getting help from outside handouts, the organization said in a statement.

The increased aid comes as the WFP and other groups have expressed increasingly dire warnings about the food situation in the North.

The country's regular annual shortages were expected to worsen this year because of floods last summer that decimated the North's agricultural heartland. The U.N. Food and Agricultural Organization has said North Korea's cereal crop will fall more than 1.5 million tons short this year, the largest food gap since 2001.

Prices at the country's few markets - where North Koreans who can afford it shop when public rations fall short - have skyrocketed due to shortages.

The U.N. agencies are conducting a food survey expected to be ready in July to determine where to distribute the aid, but the WFP said preliminary reports "indicate a high level of food insecurity."

Risley said the WFP may have to request additional food donations depending on the results of that survey.

The North has long bristled at the monitoring requirements of international donors to make sure that the food reaches the needy. However, the WFP said North Korea had allowed the agency to send nearly 50 more international workers to the country for monitoring.

"The challenge will now be to put words into action and quickly expand distributions of badly needed food aid to the hungriest people," Jean-Pierre de Margerie, WFP's Pyongyang-based country director, said in a statement.

American relief groups will distribute 100,000 tons of the aid in two northwestern provinces, with the WFP operating elsewhere.

The U.S. is the largest donor to the WFP's aid program in North Korea, having pledged US$38.9 million, followed by South Korea at US$20 million.