North Korea destroyed the most visible symbol of its nuclear weapons program Friday, according to news reports, a sign of its commitment to stop making plutonium for atomic bombs. 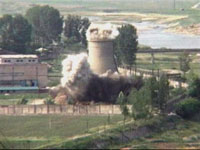 The reported demolition of the 60-foot (20-meter) -tall cooling tower at the North's main reactor complex is a response to U.S. concessions after the North delivered a declaration Thursday of its nuclear programs to be later dismantled.

China's Xinhua News Agency reported that the tower had been blown up at 5:05 p.m. local time (0805 GMT), citing its correspondent who was there. U.S. broadcaster CNN also reported the explosion had occurred. Japan's Kyodo News agency said a "North Korean source" confirmed the reactor had been destroyed, but gave no further information.

No officials immediately confirmed the reactor's destruction, and none of the broadcasters invited to witness the event had yet aired any video of the blast.

The symbolic explosion came just 20 months after Pyongyang shocked the world by detonating a nuclear bomb in an underground test to confirm its status as an atomic power. The nuclear blast spurred an about-face in the U.S. hard-line policy against Pyongyang, leading to the North's first steps to scale back its nuclear weapons development since the reactor became operational in 1986.

Last year, the North switched off the reactor at Yongbyon, some 60 miles (100 kilometers) north of the capital of Pyongyang, and it has already begun disabling the facility under the watch of U.S. experts so that it cannot easily be restarted.

The destruction of the cooling tower, which carries off waste heat to the atmosphere, is another step forward but not the most technically significant, because it is a simple piece of equipment that would be easy to rebuild.

Still, the demolition offers the most photogenic moment yet in the disarmament negotiations that have dragged on for more than five years and suffered repeated deadlocks and delays. Those attending the event include the top U.S. State Department expert on the Koreas, Sung Kim, along with broadcasters from the United States, China, Japan, Russia and South Korea.

U.S. Secretary of State Condoleezza Rice said the tower's destruction would mark a step toward disablement, something that has been ongoing for many months to prevent the North from making more plutonium for bombs.

"It is important to get North Korea out of the plutonium business, but that will not be the end of the story," she said in Kyoto, Japan, on the sidelines of a meeting of the Group of Eight industrialized countries.

North Korea's nuclear declaration, which was delivered six months later than the country promised and has not yet been released publicly, is said to only give the overall figure for how much plutonium was produced at Yongbyon, but no details of bombs that may have been made.

The declaration was being distributed Friday by China, the chair of the arms talks, to the other countries involved, U.S. envoy Christopher Hill said.

"We'll have to study it very carefully and then we'll have to work on verification," Hill said in Kyoto.

The declaration also does not include information on the North's alleged uranium enrichment program or its possible nuclear proliferation to other countries, such as Syria.

Experts believe the North has as much as 110 pounds (50 kilograms) of weapons-grade plutonium, enough for as many as 10 nuclear bombs.

To verify the claim of how much radioactive material it has produced, the U.S. says the North will open access to its reactor for inspectors to pore over the aging equipment and come to their own conclusions. However, there will be no wide-ranging inspections to survey secret nuclear facilities, some of which are believed hidden in underground tunnels.