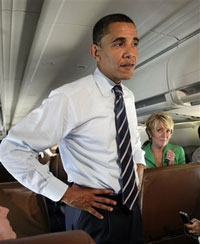 The fundraising gala Tuesday in Los Angeles marked a decided push by Obama to shore up private funding for his race against Republican John McCain roughly a week after the Democrat backtracked on a promise to use public money for his presidential race.

That decision leaves the Illinois senator, who has already shattered fundraising records by raising US$287 million by the end of May, free to raise and spend hundreds of millions of dollars for the general election.

Obama's campaign refused to say how many millions he and the Democratic National Committee raised at the gala, but Democratic officials put the number at close to US$5 million (around EUR 3.2 million). They spoke on condition of anonymity because they were not authorized to discuss the numbers publicly.

Obama, the son of a Kenyan father and a mother from Kansas, rose from near-obscurity in a matter of years to topple Hillary Rodham Clinton, who had once appeared to be the all-but-certain Democratic nominee, and could now become the first black U.S. president.

His story resonates in the entertainment industry, which has typically voted Democratic.

The party's candidates pocketed around 80 percent of the television, movie and music businesses campaign contributions during the primary season. Clinton's withdrawal from the race all but guarantees that Obama will be the recipient of that largesse.

Also in attendance was Black Eyed Peas frontman will.i.am, who created two music videos for Obama during the primary season - including one called "Yes We Can" that set music to clips from his speeches and became an Internet sensation.

The Obama campaign and the Democratic National Committee will divide the money from the fundraiser at the Dorothy Chandler Pavilion.

Beyond the fundraising, the event reflects the continuing push by Obama to pull together support within the party after a divisive primary battle against Clinton, whose husband had long been viewed as a darling of the entertainment industry.

Obama appealed to the those in the crowd who might have supported his former foe. The long primary, he said, "I know caused some heartburn and some frustration." He said he and Clinton "were allies then, and we're allies now."

The two are slated to meet with Clinton's donors Thursday and then campaign together on Friday in Unity, New Hampshire.

And earlier in the day, Obama asked his finance team to help Clinton pay off a debt of at least US$10 million from her failed presidential campaign.

In a teleconference with his top fundraisers Tuesday afternoon, Obama asked them to do what they could to help Clinton, according to two Democrats familiar with the call. A campaign spokesman confirmed that Obama had asked them to help the former first lady.

Former U.S. President Bill Clinton, in his first comment in support of Obama since the Democrat clinched the nomination, offered his support Tuesday - albeit indirectly.

In a one-line statement issued by his spokesman, Clinton committed to helping Obama become president. The offer marked what could be the beginning of an attempt to thaw frosty relations between the two men after a primary battle in which Obama, at one point, complained that he was at times unsure which Clinton he was running against.

Obama, speaking on his way to Los Angeles, said he was not certain what Clinton's role would be, but said he was eager to have the former president's help and support.

Bill Clinton was an outspoken critic of Obama during the primary race. He said Obama's opposition to the Iraq war was a "fairy tale" and raised questions about whether Obama had the experience to lead the country.

Also in California, McCain was capitalizing on his bit of star-power, appearing at an energy round-table alongside Gov. Arnold Schwarzenegger, the former actor, to call for greater conservation and green technology.

The push by a candidate representing a party not known for its support for environmental issues reflected McCain's efforts to break from the Bush administration's legacy. More directly, he was tapping into voter concerns about soaring energy prices, building on earlier arguments that the U.S. must break free from dependence on foreign oil and embrace alternative fuel technology.

McCain promised on Tuesday that as president, he would require that all government vehicles use green technology.

The Austrian-born Schwarzenegger is a McCain backer, but opposes a major element of the candidate's energy strategy _ ending a decades-old federal ban on offshore drilling. McCain has said he would leave the decision to the states if the moratorium is lifted.

During his California visit, McCain acknowledged offshore drilling would do little to immediately lower record gasoline prices, but he argued that the specter of additional supply would have a "psychological impact" that could undercut speculation that has driven the cost to more than US$4 a gallon (US$1 per liter).

The Republicans have already held a major fundraising event last month in New York, with McCain and the national party netting US$7 million.