John McCain distanced himself Monday from a top adviser who said another terrorist attack on U.S. soil this election year would benefit the Republican presidential candidate. Barack Obama's campaign called the comment a "complete disgrace." 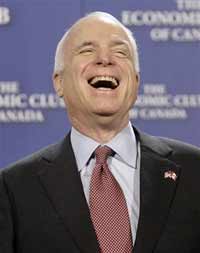 Charlie Black, an adviser already in the spotlight for his past lobbying work, is quoted in the upcoming July 7 edition of Fortune magazine as saying such an attack "certainly would be a big advantage to him." Black said Monday he regretted the comment.

Black is also quoted as saying the "unfortunate event" of the assassination of former Pakistani prime minister Benazir Bhutto in December 2007 "helped us."

Questioned about Black's comments during a news conference, McCain said, "I cannot imagine why he would say it; it's not true. I've worked tirelessly since 9/11 to prevent another attack on the United States of America. My record is very clear."

Citing his work to establish a commission to investigate the Sept. 11, 2001, terrorist attack on the United States, as well as his membership on the Senate Armed Services Committee, McCain added: "I cannot imagine it, and so, if he said that - and I don't know the context - I strenuously disagree."

In a statement, Obama spokesman Bill Burton said, "The fact that John McCain's top adviser says that a terrorist attack on American soil would be a 'big advantage' for their political campaign is a complete disgrace, and is exactly the kind of politics that needs to change. Barack Obama will turn the page on these failed policies and this cynical and divisive brand of politics so that we can unite this nation around a common purpose to finish the fight against al-Qaida."

Black, interviewed by reporters as he stood outside McCain's fundraiser, said: "I deeply regret the comments. They were inappropriate. I recognize that John McCain has devoted his entire adult life to protecting his country and placing its security before every other consideration."

In the 2004 presidential race, President George W. Bush, Vice President Dick Cheney and other Republicans argued that Democratic nominee John Kerry was soft on terrorism, an argument that resonated with voters at the polls. The Republicans also questioned the Democrats' record on national security in 2002, and it paid dividend at the polls in the congressional elections.

The Republican argument - that Democrats had a pre-Sept. 11 mind-set - failed in the 2006 midterm elections as the Democrats wrested control of Congress from the Republicans.

McCain has repeatedly tried to portray Obama as naive on national security and naive on foreign policy.