Nearly 40,000 travelers will remember U.S. President George W. Bush's stopover in London. Their flights were canceled or delayed at Heathrow Airport to accommodate him, according to British Airways. 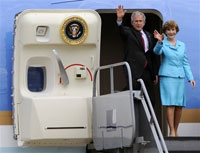 BAA, the airport owner, confirmed Tuesday that 32 arrivals and 36 departures, mostly British Airways flights, were canceled June 15, when Bush arrived, and the following day, when he left. BAA had no figures on delays related to the president's visit.

"BAA, the airlines and other business partners at Heathrow did everything in their power to minimize disruption at the airport during George Bush's presidential visit," BAA said in a statement. "Despite our best efforts some disruption did occur, for which we apologize to passengers affected."

"The decision to allow President Bush and his fleet of aircraft to fly into Heathrow rather than a military base was one all of Heathrow's users could have done without," Walsh said in the airline's employee news letter. "I am also angry that this was allowed."