The Dalai Lama said Thursday that talks with China's government on resolving unrest in Tibet might resume next month, and he urged his supporters not to cause trouble when the Olympic torch is in the Himalayan territory. 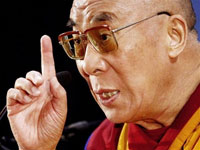 The exiled Tibetan leader said he supports China's stated desire for a stable and harmonious society, but he also renewed his call for Beijing to grant Tibet meaningful autonomy.

"Stability, unity must come from the heart, not a gun," the Dalai Lama told a news conference in Sydney. "And harmonious society must come from ... trust. Give Tibetans meaningful autonomy; that will satisfy Tibetans."

Representatives of the Tibetan government-in-exile met with Chinese officials in early May for informal talks on how to move beyond the unrest in the region, which flared in March into violence that killed at least 22 people.

The clashes fueled anger at China's rule in Tibet, and the Olympic torch relay became a focus of Tibetan pro-independence protests in Paris, London and other cities that threatened to cast a shadow over the Beijing games in August.

The Chinese government blames the Dalai Lama for the unrest, saying it was part of a campaign to split Tibet from the rest of China. The Dalai Lama has denied those charges, saying he wants meaningful autonomy for the Tibetan people under China's rule, not independence.

He said plans for a formal round of talks between his envoys and Beijing's had been postponed because of China's disastrous May 12 earthquake, which killed almost 70,000 people.

"This (is) not a pullout, simply this is a postponement," the Dalai Lama said. He said the meeting would take place "maybe next month."

The Dalai Lama also reiterated his call for his supporters not to target the Beijing Olympics or the torch.

"We have fully supported the Olympic Games right from the beginning. The torch is part of that," he said. "Over 1 billion Chinese brothers and sisters feel really proud of that. We must respect that. Therefore, we should not disturb that."

He said he did not think there will be "any trouble" when the torch relay is in Tibet.

The torch, currently threading its way through China, will be used to officially launch the Olympics in Beijing on Aug. 8. The relay is due in Tibet on June 19-21.

China says it has ruled Tibet for centuries, although many Tibetans say their homeland was essentially an independent state for most of that time. Chinese Communist troops occupied Tibet in 1951.

The March unrest was the most widespread and sustained action against Beijing's rule in decades, focusing attention on accusations that Chinese policies in the region are eroding its traditional Buddhist culture and mainly benefit Chinese who moved there since the occupation.

China says 22 people died in the March violence in Tibet's capital of Lhasa, while overseas Tibet supporters say many times that number have been killed in protests and the ensuing security crackdown across Tibetan regions of western China.

The Dalai Lama is in Sydney to deliver a series of meditation lectures.