Scott McClellan damns Bush on nearly every level in his memoir

In a shocking turnabout, the press secretary most known for defending President George W. Bush on Iraq, Katrina and a host of other controversial issues produced a memoir damning of his old boss on nearly every level - from too much secrecy to a less-than-honest selling of the war to a lack of personal candor and an unwillingness to admit mistakes. 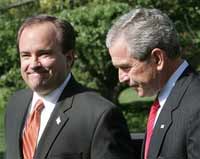 Scott McClellan damns Bush on nearly every level in his memoir

In the first major insider account of the Bush White House, one-time spokesman Scott McClellan calls the operation "insular, secretive and combative" and says it veered irretrievably off course as a result.

"Scott, we now know, is disgruntled about his experience at the White House," said current White House press secretary Dana Perino, a former deputy to McClellan. "We are puzzled. It is sad. This is not the Scott we knew."

McClellan was the White House press secretary from May 2003 to April 2006, the second of four so far in Bush's presidency.

He reveals that he was pushed to leave earlier than he had planned, and he displays some bitterness about that as well as about being sometimes kept out of the loop on key decision-making sessions.

He excludes himself from major involvement in some of what he calls the administration's biggest blunders, for instance the decision to go to war and the initial campaign to sell that decision to the American people. But he does not spare himself entirely, saying, "I fell far short of living up to the kind of public servant I wanted to be.

He includes criticism for the reporters whose questions he fielded. The news media, he says, were "complicit enablers" for focusing more on "covering the march to war instead of the necessity of war."

And McClellan issues this disclaimer about Bush: "I do not believe he or his White House deliberately or consciously sought to deceive the American people."

But most everything else he writes comes awfully close to making just this assertion, all the more stunning coming from someone who had been one of the longest-serving of the band of loyalists to come to Washington with Bush from Texas.

The heart of the book concerns Bush's decision to go to war in Iraq, a determination McClellan says the president had made by early 2002 - at least a full year before the invasion - if not even earlier.

"He signed off on a strategy for selling the war that was less than candid and honest," McClellan writes in "What Happened: Inside the Bush White House and Washington's Culture of Deception."

The book, which had been scheduled for release on Monday, was being sold by bookstores on Wednesday after the publisher moved up its release amid intense media coverage of its contents. It quickly vaulted to No. 1 on amazon.com's best-seller list.

McClellan says Bush's main reason for war always was "an ambitious and idealistic post-9/11 vision of transforming the Middle East through the spread of freedom." But Bush and his advisers made "a marketing choice" to downplay this rationale in favor of one focused on increasingly trumped-up portrayals of the threat posed by the weapons of mass destruction.

During the "political propaganda campaign to sell the war to the American people," Bush and his team tried to make the "WMD threat and the Iraqi connection to terrorism appear just a little more certain, a little less questionable than they were." Something else was downplayed as well, McClellan says: any discussion of "the possible unpleasant consequences of war _ casualties, economic effects, geopolitical risks, diplomatic repercussions."

In Bush's second term, as news from Iraq grew worse, McClellan says the president was "insulated from the reality of events on the ground and consequently began falling into the trap of believing his own spin."

All of this was a "serious strategic blunder" that sent Bush's presidency "terribly off course."

"The Iraq war was not necessary," McClellan concludes.

Democratic presidential candidate Hillary Rodham Clinton referred to the book and its author while campaigning Wednesday in Rapid City, South Dakota, saying, "In this book this young man essentially apologizes for having been part of misleading America for three years."

Reporters in Los Angeles with John McCain, the Republicans' candidate for president, asked if he believed that Bush used propaganda or deception regarding the war in Iraq. "I have no information on that fact. I am glad for one that Saddam Hussein is no longer there," McCain said. He declined to comment on other assertions in the book, saying he had not read it.

But McClellan ticks off a long list of Bush's weaknesses: someone with a penchant for self-deception if it"suits his needs at the moment," "an instinctive leader more than an intellectual leader" who has a lack of interest in delving deeply into policy options, a man with a lack of self-confidence that makes him unable to acknowledge when he's been wrong.

McClellan also writes extensively about what he says is the Bush White House's excessive focus on "the permanent campaign."

"The Bush team imitated some of the worst qualities of the Clinton White House and even took them to new depths," he writes.

McClellan is most scathing on the topic of the administration's embrace of secrecy.

"The Bush administration lacked real accountability in large part because Bush himself did not embrace openness or government in the sunshine," he writes.

McClellan calls Vice President Dick Cheney "the magic man" who "always seemed to get his way" and sometimes "simply could not contain his deep-seated certitude, even arrogance, to the detriment of the president."

Secretary of State Condoleezza Rice, who was national security adviser earlier in Bush's presidency, "was more interested in figuring out where the president stood and just carrying out his wishes while expending only cursory effort on helping him understand all the considerations and potential consequences" of war. Rice "was somehow able to keep her hands clean, even when the problems related to matters under her direct purview," McClellan says, but he predicts that "history will likely judge her harshly."

And former Bush political guru Karl Rove "always struck me as the kind of person who would be willing, in the heat of battle, to push the envelope to the limit of what is permissible ethically or legally."

The White House was severely damaged by blunders beyond the war, McClellan says.

When Hurricane Katrina hit the Gulf Coast in August 2005, for instance, the administration went on autopilot "rather than seizing the initiative and getting in front of what was happening on the ground."

And Bush's drive to remake the Social Security program after his 2004 re-election failed in large part because the White House focused almost exclusively on "selling our sketchily designed plan" instead of doing behind-the-scenes work with lawmakers.

McClellan explains his dramatic shift from defender to critic as a difficult act of personal contrition, a way, to learn from his mistakes, be true to his Christian faith and become a better person. He says he started the book to explain his role in the CIA leak case, in which some of his own words turned out to be what he called "badly misguided," though sincere at the time.

McClellan says Bush loyalists will no doubt continue to think the administration's decisions have been correct and its unpopularity undeserved. "I've become genuinely convinced otherwise," he says.

"Not once did Scott approach me - privately or publicly - to discuss any misgivings he had about the war in Iraq or the manner in which the White House made the case for war," McClellan's predecessor as press secretary, Ari Fleischer, said.

Said Fran Townsend, former head of the White House-based counterterrorism office and now a CNN commentator: "This now strikes me as self-serving, disingenuous and unprofessional."

Perino described Bush as "surprised" by the book but said the president wouldn't have anything to say about it. "He has more pressing matters than to spend time commenting on books by former staffers," she said.