Two of the U.S. military's most prominent voices on Middle East issues are holding out the prospect of improved relations with Iran despite tensions over its nuclear and military ambitions. 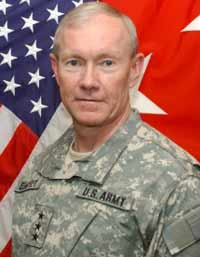 Army Lt. Gen. Martin Dempsey, acting head of the U.S. Central Command, said in an Associated Press interview that Washington and Tehran could seek common ground on tough issues like combating the illicit drug trade in Afghanistan if Iran would stop its "malign activity" inside Iraq.

And Army Gen. David Petraeus, expected to win Senate confirmation as the permanent head of Central Command, told the Senate Armed Services Committee on Thursday that although Iran is fueling proxy wars in the Middle East he sees a possibility of "more constructive relations."

Their remarks reflect a U.S. effort, from President George W. Bush and Defense Secretary Robert Gates on down, to highlight Iranian activity that Washington deems harmful in Iraq, Lebanon and elsewhere in the Middle East while also encouraging Tehran to change its behavior.

At a time of growing speculation that Iran and the United States are edging closer to open conflict, the generals' comments appear hopeful, perhaps indicating a view that there is a reasonable prospect of avoiding war by using diplomatic and other means to nudge Iran in a new direction.

Dempsey, whose Central Command area of military responsibility features numerous interrelated problems, including the Israeli-Palestinian conflict, said it is clear that Iran is exerting its influence across the region, from Lebanon to Iraq and possibly even into western Afghanistan.

Even so, Dempsey said in the interview Wednesday at his Central Command headquarters in Tampa, Florida, that he believes there are "plenty of opportunities to have some region-altering events." He cited as an example the announcement Thursday that Syria and Israel were negotiating a peace deal.

"There is even reason to find common ground with Iran on certain issues, like counternarcotics," he said, "but it's pretty difficult to do that when (U.S.) soldiers are dying because of lethal munitions provided by them."

Dempsey was referring to U.S. allegations that Iran is training Iraqi Shiite militiamen and providing them with rockets, mortars and technology for a particularly deadly type of roadside bomb.

The narcotics trade that stems largely from vast opium harvests in Afghanistan is an issue of great interest to both the United States and Iran, Dempsey said. The U.S. government sees stopping it as central to transforming Afghanistan's meager economy and supporting the country's political development.

Dempsey said Iran is a problem to be viewed in a regional context.

"We've got to counter Iranian influence inside Iraq because Iran very clearly sees it as in their interest to keep the level of violence up and to keep the Shiite parties at odds and to try to discredit U.S. forces and U.S. policy in the region," he said. "It's going to take an acknowledgment on the part of the Iraqis and the regional partners that this is a destabilizing influence across the region."

In his opening statement to his Senate confirmation hearing, Petraeus made a similar point about Iran.

"It persists in its nontransparent pursuit of nuclear technology and continues to fund, train and arm dangerous militia organizations," Petraeus said. "Iran's activities have been particularly harmful in Iraq, Lebanon, the Palestinian territories and Afghanistan. In each location, Tehran has, to varying degrees, fueled proxy wars in an effort to increase its influence and pursue its regional ambitions."

He added, however, that there is room to hope for change.

"Even as we work with leaders in the region to help protect our partners from Iranian intimidation or coercion, however, we must also explore policies that over the long term offer the possibility of more constructive relations, if that is possible," Petraeus said. "Together with regional and global partners, we need to seek ways to encourage Iran to respect the integrity of other states, to embrace nonproliferation of nuclear weapons, and to contribute to regional stability rather than regional instability."

Dempsey was thought to have been in the running to succeed Navy Adm. William J. Fallon as commander of Central Command after Fallon resigned abruptly in March, but Bush instead nominated Petraeus, the more widely known commander of coalition forces in Iraq.

Fallon quit after a magazine report cast him as resisting a White House inclination to go to war with Iran.

Because Petraeus is not expected to move from Iraq to Central Command until September, Dempsey is in the unusual position of heading the command for several months with his successor in waiting. If Petraeus takes command in September as expected, Dempsey will move to a post for which he was confirmed by the Senate in March: commander of U.S. Army Europe, a four-star post.

In the AP interview, Dempsey said he is determined to stay in close touch with his counterparts in the Middle East, as well as in Afghanistan, Pakistan and other nations in Central Asia.

"It's all about continuity and commitment," he said, alluding to the transition from Fallon to Petraeus.

He took that message on a journey last week that included stops in Afghanistan, Iraq and Lebanon, and he said he will reinforce it during another trip next week to Egypt, Saudi Arabia, Jordan and Afghanistan.