China's capital reported on Wednesday its first death from the hand, foot and mouth disease virus that has sickened tens of thousands of children across the country and killed at least 42 people. 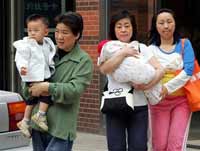 The director of the health bureau's publicity office, contacted by telephone, declined to comment on the death.

The health bureau also told Xinhua that another child died of the illness in Beijing, but the death was counted in the victim's home province of Hebei, which neighbors Beijing. A 21-month-old boy also died of the virus Monday in Hubei province, Xinhua reported.

It said 3,606 hand, foot and mouth infections had been reported in Beijing as of Monday. It also said 32 patients remained in Beijing hospitals, with eight in serious condition.

"It is likely that the figures may be fluctuating greatly in the next few weeks" because the Health Ministry last week ordered care providers to report cases within 24 hours, ministry spokesman Mao Qunan said, according to the ministry's Web site.

China has also been struggling to handle the magnitude-7.9 earthquake that struck Monday and killed more than 12,000 people.

The hand, foot and mouth virus has been yet another major concern for Chinese authorities as they prepare for the Beijing Olympics in August. Cases have been reported from Guangdong province in the south to Jilin province in the northeast, and in major cities including Beijing and Shanghai.

"What I know is the death rate has gone down drastically since early May," World Health Organization China representative Hans Troedsson said Wednesday. "There are very, very few cases with complications - 99 percent of these are mild cases."

U.S. Health and Human Services Secretary Mike Leavitt was visiting China this week and said the U.S. was willing to help China battle the illness.

Most cases of hand, foot and mouth disease in China this year have been blamed on enterovirus 71.

The virus spreads through contact with saliva, feces, nose and throat mucus or fluid secreted from blisters. There is no vaccine or specific treatment, but most children with mild forms of the illness recover quickly after suffering little more than a fever and rash.

The disease is expected to peak in the hot months of June and July.