U.S. Democratic presidential candidates Hillary Rodham Clinton and Barack Obama seized on the fifth anniversary of the Iraq war to snipe at each other and at the presumptive Republican nominee, John McCain, who has tied his campaign to success in the unpopular conflict. 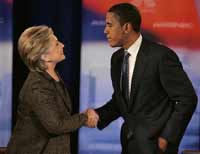 McCain, meanwhile, was in London on Thursday, a day after visiting Israel and burnishing his credentials with the U.S. Jewish vote, insisting Israeli leaders were justified in their tough policy against Hamas militants in Gaza.

When the election campaign began, the Iraq war looked to be the key issue among U.S. voters who were increasingly disenchanted with the conflict that has killed tens of thousands of Iraqis and nearly 4,000 Americans, while costing taxpayers hundreds of billions of dollars (euros).

But as the U.S. economy slips toward recession and world equity markets gyrate dangerously, the war has become the second place issue among voters concerned about mortgage foreclosures, rising fuel costs and deep losses in their retirement investment accounts.

The war anniversary brought the issue back to the forefront Wednesday. U.S. President George W. Bush said America was safer and the world was a better place for his 2003 order to invade Iraq and depose Saddam Hussein.

In a speech near North Carolina's Fort Bragg military base, Obama said Clinton could not be trusted to end the conflict. As a state senator in Illinois, Obama opposed the American invasion and has repeatedly reminded voters that Clinton voted in the upper house of the U.S. Congress to support Bush's request for authorization to invade.

"Ask yourself," Obama told the crowd, "who do you trust to end a war: Someone who opposed the war from the beginning, or someone who started opposing it when they started preparing a run for president?"

The Clinton campaign quickly fired back that the opposite was true.

"The reality is that Senator Obama took practically no action to end the war until he started his White House run, while Senator Clinton has been a consistent critic of Iraq for many years," campaign spokesman Phil Singer said.

Clinton countered on another issue during an appearance in Detroit _ the Michigan city that is capital of America's struggling auto industry. She said it would be "wrong, and frankly un-American" if Obama did not agree to new primaries in Michigan and Florida.

Florida and Michigan both held primaries in January on a schedule that violated Democratic Party rules, and have been stripped of their convention delegates as a result. The Clinton campaign views both states as likely wins should there be a revote.

Obama has yet to declare his support or opposition, although his campaign has raised a number of procedural and legal questions about the most recent proposal for an early June primary in Michigan. He has said he would abide by the Democratic National Committee's decision on the matter.

Obama leads Clinton among delegates whose votes were determined by primaries or caucuses, 1,404 to 1,249. But neither is on track to win enough pledged delegates in primaries and caucuses to clinch the nomination _ 2,024 are needed _ so the outcome could be decided by superdelegates, elected and party officials who can choose whoever they like.

Clinton leads among superdelegates who have announced a choice, 250-213. About 40 percent of the superdelegates have not declared, including 10 Democratic governors.

Obama and Clinton are battering each other in a race where both, despite their damaging rhetoric, are fairly close on most key issues _ especially the Iraq war.

Obama renewed his pledge to pull American forces out of Iraq within 16 months of taking office and declared he would shift the American focus abroad to Afghanistan and Pakistan, where Osama bin Laden and other al-Qaida leaders are believed to be hiding along the countries' mountainous border.

He said McCain's plan to stay the course in Iraq would make the world more dangerous because it would detract from effort to find bin Laden and other al-Qaida leaders.

"We have a security gap when candidates say they will follow Osama bin Laden to the gates of hell, but refuse to follow him where he actually goes," Obama said.

In West Virginia, the state Clinton said has the most veterans per capita, the former first lady restated her proposals to improve the lives of those who have served in the military, and promised a series of federal programs.

In Israel, McCain toured the town of Sderot, near the border with Gaza, and said he understood Israel's tough response to Palestinian rocket fire, adding that there was no point in negotiating with Gaza's Islamic Hamas regime. Sderot has been the target of thousands of crude Palestinian rockets in recent years.

McCain's two-day visit included meetings with moderate Palestinian President Mahmoud Abbas, Israeli Prime Minister Ehud Olmert and other Israeli leaders. He was not visiting the Palestinian territories and spoke with Abbas by telephone.

Also Wednesday, the National Archives in Washington and Bill Clinton's presidential library in Arkansas jointly released more than 11,000 pages of schedules showing Hillary Clinton's day-to-day activities as a first lady. The documents were made public after months of pressure from critics who say the Clintons were delaying the disclosure.

Among other disclosures, the papers showed Clinton was home in the White House on six days between 1995 and 1997 when her husband had sexual encounters there with intern Monica Lewinsky.