The United Nations' top human rights official is quitting in few months. High Commissioner for Human Rights Louise Arbour has told U.N. Secretary-General Ban Ki-moon that she will step down at the end of her current four-year term on June 30. 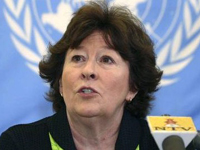 Arbour made her decision public in Friday's session of the 47-nation U.N. Human Rights Council. The 61-year-old Canadian legal expert stopped short of telling the council why she is leaving but, like her predecessors, she has been a frequent target of criticism from a broad range of countries.

Louise Arbour was born February 10, 1947 in Montreal , Quebec to Bernard Arbour (deceased) and Rose Ravary, the owners of a hotel chain, she attended convent school, during which time her parents divorced. As editor of the school magazine, she earned a reputation for irreverence.

In 1967, she graduated from College Regina Assumpta, and proceeded to the Université de Montréal where she completed an LL.L. with distinction in 1970. She became the Law Clerk for Mr. Justice Louis-Philippe Pigeon of the Supreme Court of Canada in 1971-1972 while completing graduate studies at the Faculty of Law (Civil Section) of the University of Ottawa . She was called to the Bar of Quebec in 1971 and to the Ontario Bar in 1977. She was made a Companion to the Order of Canada in 2007 "for her contributions to the Canadian justice system and for her dedication to the advancement of human rights throughout the world".

Throughout her career, Arbour has published in the area of criminal procedure and criminal law, in both French and English. At various times, she has served as an editor for the Criminal Reports, the Canadian Rights Reporter, and the Osgoode Hall Law Journal.