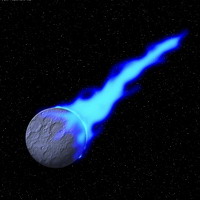 Pacific Northwest could witness early Tuesday an object resembling a meteor gliding through the sky and leaving bright lights and sonic booms as an “afterthought.”

Perhaps, this was exactly the meteor that had been orbiting the sun for millions of years before entering Earth's orbit.

A witness reported that he saw the meteor hitting the Earth near State Route 26 and the Lind-Hatton Road about 5:45 a.m., but nothing was found. This allegation may be ascribed to a common optical illusion.