By Anastasia Tomazhenkova: Swiss police has found two Impressionist paintings stolen in one of Europe's largest art thefts. The paintings were found in an abandoned car near Zurich mental hospital. 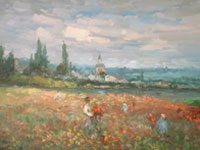 The pictures, by Vincent van Gogh and Claude Monet, were among four paintings worth 180 million Swiss francs (163 million dollars) that were stolen from a private museum in a February 10 armed robbery.

The two other paintings taken from the E.G. Buehrle Collection - by Edgar Degas and Paul Cezanne - remain missing.

The two recovered paintings - Monet's "Poppy field at Vetheuil" and van Gogh's "Blooming Chestnut Branches" - were in good condition and still under the glass behind which they were displayed in the museum.

The pictures were identified by museum director Lukas Gloor after a thorough inspection.

The paintings were discovered in a parking lot in front of a Zurich mental hospital on Monday. Police reported that it was unknown how long the white sedan had been there.