Is Archbishop Oscar Romero a martyr?

By Anastasia Tomazhenkova: Archbishop Oscar Romero, the outspoken Salvadoran church leader, was killed in 1980 as he celebrated Mass. His beatification remains at a standstill while officials study whether his death made him a martyr for the faith. 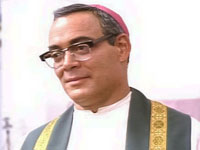 Is Archbishop Oscar Romero a martyr?

The head of the Congregation for the Causes of Saints, Cardinal Jose Saraiva Martins claimed that to put Romero on the path to sainthood, the church must first determine if the Archbishop of San Salvador was killed for religious reasons or for other motives.

"To be a martyr, the Catholic faithful must be killed for 'hatred of the faith," said Martins. "There can be political, social motives. If the motive is not clear it must be studied in depth."

The cardinal stressed that the Vatican was not trying to block the beatification of Romero - a clergyman who many in Latin America see as a political hero for the left.

Romero was appointed archbishop of El Salvador's capital in 1977 in the midst of the military-led government's crackdown on suspected guerrillas and leftist opponents.

The archbishop responded with emotional homilies condemning human rights abuses by the dictatorship and paramilitary groups, and advocating for the many impoverished Salvadorans who were being terrorized. The day after Romero called on the nation's military to halt its repression, he was shot while leading worship in a hospital chapel.

Both Pope John Paul II and Pope Benedict XVI have said publicly that Romero was indeed a martyr for the faith, which means he could be beatified without the Vatican having to confirm a miracle attributed to him. But the Congregation for the Causes of Saints has yet to make that determination.