Woman, that buried her babies in flower-pots, to face trial again

By Anastasia Tomazhenkova: A German woman was convicted in 2006 of killing 8 of her newborn babies. She buried them in flower pots and a fish tank in the garden of her parents, home near the German-Polish border. 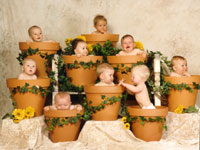 Woman, that buried her babies in flower-pots, to face trial again

A court began reconsidering the sentence of Sabine Hilschenz convicted of killing her babies, after a higher court ruled that judges had failed to fully considered the woman's awareness of her crime.

The 8 infants were born between 1992 and 1998. Hilschenz also was suspected in the death of a 9th child in 1988, but the statute of limitations did not allow for that case to be tried.

After her conviction in a court in Frankfurt an der Oder, on the Polish border, she was given the maximum 15 year prison sentence.

But the Federal Court of Justice ruled last year that the lower court had not sufficiently considered the possibility of diminished capacity in making its recommendation, and sent the case back for the sentence to be reconsidered.

In the retrial, to last three days, judges will again hear the evidence and some witnesses were expected to testify. However, Hilschenz's conviction on manslaughter charges will not be reconsidered.

Hilschenz declined to testify at her original trial, but previously had told investigators she was drunk when she went into labor and could not remember the births.