By Anastasia Tomazhenkova: Vitaly Kaloyev, a Russian man who killed a Swiss air traffic controller he blamed for a plane crash that killed his wife and children was appointed to a high-level government post in his home province in southern Russia. 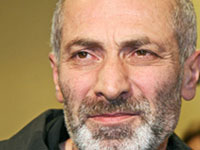 Vitaly Kaloyev, an architect, was named deputy construction and architecture minister of North Ossetia, one of Russia's 85 administrative regions.

Kaloyev was charged with killing a flight control officer of the Swiss company Skyguide. The court ruled that Kaloyev had committed a premeditated murder of the man, whom he considered guilty of the death of his family. Vitaly Kaloyev's wife and two children died in a plane crash over Lake Constance, which made world news headlines on 2 July 2002.

The plane crash occurred in the area controlled by the Swiss company Skyguide. The company's administration originally refused to claim responsibility for the horrible tragedy. The authorities of Germany and Switzerland had to present official condolences to the families of the plane crash victims instead, while Skyguide brought its apologies only two years after the accident. Investigators concluded that the air traffic in the area of the crash was not heavy that night, although it required the work of three flight control officers. However, there was only one officer at the control panel, Peter Nielsen of Denmark.

Vitaly Kaloyev, who lost his wife and children in the plane crash over Germany, arrived in Zurich, in an attempt to receive official apologies from Skyguide's Director, Alan Rossier, but received nothing for his pains. The grieving man decided to go to the town of Kloten (a suburb of Zurich), where the above-mentioned flight control officer was residing with his wife and three children. Kaloyev came to the Nielsens', and the two men talked to each other privately; the conversation was held in loud voices. When Kaloyev left, Peter Nielsen's wife found her husband dead with numerous stab wounds.

Kaloyev, 51, was convicted in Switzerland in October 2005 of killing Peter Nielsen and sentenced to five-and-a-quarter years in prison. He was released in November under an order by Switzerland's highest court.

Nielsen, a Dane, had been the only person on duty when a plane of Russia's Bashkirian Airlines and a DHL cargo jet collided on July 1, 2002, in airspace he had been responsible for over southern Germany. The crash killed 71 people, mostly schoolchildren on a holiday trip to Spain.

Kaloyev was working in Spain at the time, and his wife and two children were on their way to visit him.

He was freed in accordance with Swiss legislation that allows early release of convicted criminals for good behavior after they complete two-thirds of a sentence.

Kaloyev's ordeal has brought him widespread sympathy in Russia.

In September, four Skyguide employees were found guilty of negligent homicide in a separate case examining the events that led to the crash. Their punishments ranged from a one-year suspended prison sentence to fines.