By Anastasia Tomazhenkova: Stora Enso plants in Finland went on strike. 2,500 workers walked out to protest layoffs and mill closures. 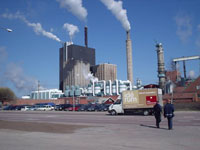 The Finnish-Swedish paper maker's confirmation earlier in the day that it will shut down three mills in Finland and lay off up to 985 people - was the reason for the strike.

The workers plan to last the strike until Saturday

In October, Stora Enso Oyj said it would lay off some 1,700 workers in Finland and Sweden, cut production and slash more than a third of its administrative staff worldwide. Total annual savings should amount to some Ђ160 million (US$230 million) by 2009, the company said.