The U.S. Food and Drug Administration reported that cloned animals gave safe meat and milk like their counterparts bred the old-fashioned way did. 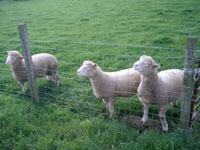 The decision removes the last U.S. regulatory hurdle to marketing products from cloned cows, pigs and goats, and puts the FDA in concert with recent safety assessments from European food regulators and several other nations.

"The data show that healthy adult clones are virtually indistinguishable" from their counterparts, concludes FDA's 900-plus page safety report.

But for economic reasons, it will be years before many foods from cloned animals reach store shelves. At $10,000 (Ђ6,700) to $20,000 (Ђ13,450) per animal, they are a lot more expensive than ordinary cows. That means producers likely will us clones' offspring for meat, not the clones themselves.

In addition, several large food companies - including dairy giant Dean Foods Co. and Hormel Foods Corp. - have said they have no plans to sell milk or meat from cloned animals, because of consumer anxiety about the technology.

With FDA's ruling, "If you ask what's for dinner, it means just about anything you can cook up in a laboratory," said Carol Tucker-Foreman of the Consumer Federation of America, who pledged to push for more food producers to shun cloned animals.

"We certainly are pleased," said Trans Ova President David Faber, who noted that previous reports by the National Academy of Sciences and others have reached the same conclusion.

"Our farmer and rancher clients are pleased because it provided them with another reproductive tool," he added.

Food producers have voluntarily withheld cloned animals from the market pending FDA's decision, and it was not immediately clear Tuesday if that moratorium was ending immediately - or if other government agencies must weigh in first.

The ruling was long-expected - and mirrors FDA's initial safety assessment back in 2003 - but highly controversial nonetheless. Debate has been fierce within the Bush administration as to whether the FDA should move forward, largely because of trade concerns. Consumer advocates petitioned against the move, and Congress had passed legislation urging the FDA to study the economic ramifications before moving ahead.

It was a day forecast since 1997, when Scottish scientists announced they had successfully cloned Dolly the sheep. Ironically, sheep are not on the list of FDA's approved cloned animals; the agency said there was not as much data about their safety as about cows, pigs and goats.

By its very definition, a successfully cloned animal should be no different from the original animal whose DNA was used to create it.

But the technology hasn't been perfected - and many attempts at livestock cloning still end in fatal birth defects or with deformed fetuses dying in the womb. Moreover, Dolly was euthanized in 2003, well short of her normal lifespan, because of a lung disease that raised questions about how cloned animals will age.

The FDA's report acknowledges that, "Currently, it is not possible to draw any conclusions regarding the longevity of livestock clones or possible long-term health consequences" for the animal.

But the agency concluded that cloned animals that are born healthy are no different from their non-cloned counterparts, and go on to reproduce normally as well.

"The FDA says, 'We assume all the unhealthy animals will be taken out of the food supply,"' said Joseph Mendelson of the Center for Food Safety, a consumer advocacy group that opposes FDA's ruling. "They're only looking at the small slice of cloned animals that appear to be healthy. ... It needs a lot further study."