By Anastasia Tomazhenkova: Four French tourists were robbed at gunpoint and then shot dead with automaticweapons fire on Christmas Eve. Police arrested two Mauritanian men suspected in the murder of the tourists in Guinea-Bissau's capital. 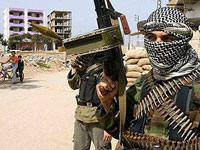 Officials claimed that the suspects were being held in the detention cell at the country's judicial police. The suspects are believed to belong to an Algerian-based terror cell affiliated with al-Qaida.

They were caught around 700 kilometers (430 miles) south of where the French family was assassinated.

Five tourists had stopped on the side of the highway to have a picnic on Christmas Eve near Alegh, Mauritania. Suddenly the gunmen approached them, demanding money. The offenders took their money and then opened fire with automatic weapons. The robbers then whirled away in an old model Mercedes Benz. Four tourists died. The fifth French tourist was seriously injured.

A manhunt was launched in Senegal and Mali, Mauritania's immediate neighbors to the south and southeast. On Monday, nine people were arrested in Mauritania and accused of having helped the gunmen.

The nine included a car salesmen who allegedly sold the old Mercedes Benz that the assassins used as their getaway car and a boatman who helped them cross the river separating Mauritania from Senegal.