Catholic priest fails to carry 7,7 pounds of cocaine on board plane

By Anastasia Tomazhenkova: Amsterdam's Schiphol Airport hasn't seen such a thing before. Police arrested a man claiming to be a Catholic priest. He was caught carrying 3.5 kilograms (7.7 pounds) of cocaine under his robes. 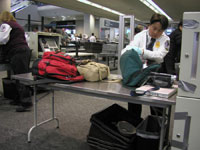 Catholic priest fails to carry 7,7 pounds of cocaine on board plane

The spokesman for Dutch border police claimed that the man, whose identity was being traced, initially refused to undergo a routine body check "for religious reasons".

The priest was then spotted lining up at a different entrance gate. He was searched and the drugs were found in packages taped to his body.

"We've seen a lot of things, baseballs filled with cocaine, wine bottles, plaster casts, but this is a first," the spokesman said.

The man, who was traveling from Bolivia, continued to insist he is a priest and did not confess any wrongdoing, arguing his rights had been violated by the search.

The spokesman said that was bunk.

"If you want to enter (Europe) you have to pass a security check, you have to cooperate and you can't refuse a body search," he said. "He'll be brought before a judge today."