By Margarita Snegireva. Needle - exchange programs that were banned nine years ago in the District if Columbia start again as authorities consider them an efficient measure of reducing rate of AIDS and HIV infections in the nation's capital. 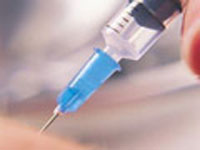 President Bush on Wednesday signed a $555 billion federal spending bill that includes a provision allowing the city to spend its own money on programs that provide clean hypodermic needles to drug users. Federal spending packages dating back to 1998 had blocked such programs.

A hypodermic needle-exchange program is a sometimes controversial social policy, based on the philosophy of harm reduction where injection drug users can obtain hypodermic needles and associated injection equipment at little or no cost. These programs are called "exchanges" because many require exchanging used needles for an equal number of new needles. In addition to sterile needles, syringe exchange programs typically offer other services such as: HIV and Hepatitis C testing; alcohol swabs; bleach and sterile water; aluminum "cookers"; containers for needles and many other items.

In the United States around 1/5 of all new HIV infections and the vast majority of Hepatitis C infections are the result of injection drug use . Dozens of studies have shown needle exchanges to be effective at preventing the spread of HIV and Hepatitis C . Needle exchange programs are supported by the Center for Disease Control and the National Institute of Health. The National Institute of Health estimates that in the United States, between fifteen and twenty percent of injection drug users have HIV and at least seventy percent have hepatitis C.The presence of needle exchange programs has been attributed to a reduction of high-risk injection behavior by up to 74%.

Needle-exchange programs can be traced back to informal activities undertaken during the 1970s, however the idea is likely to have been discovered a number of times in different locations. The first identifiable needle distribution service was undertaken by a private pharmacist in Scotland (1982 to 1984).