Last week was marked by a historic event, a softball game in the name of peace between American and Japanese World War II veterans. 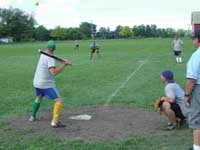 For many people this trip meant a lot, Karl Sommer was among them.

Sommer was a high school sophomore in Rochester, New York, when Japan attacked Pearl Harbor. The boy enlisted under the influence of his father.

He joined the Navy in 1944 and later served in Korea . Afterward, he became a St. Petersburg police detective and owned an orange grove near Dade City.

A former soldier had diabetes, but had not other problems with heath and was very active and enthusiastic.

This weekend, just after returning from a reunion softball, he had low sugar level and the feeling of tightness in his chest. He suffered a heart attack and died on Saturday in St. Petersburg. He was 81.

His funeral is scheduled January 3rd in St. Petersburg.