By Margarita Snegireva. NBA basketball star Tony Parker sued a celebrity gossip Web site over an article that told he had an affair with French model. 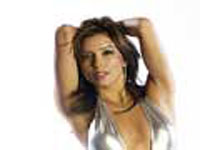 Parker wants X17online.com to pay him a big sum of money as it published false stories that claimed Parker was unfaithful to his wife actress Eva Longoria. He wants $40 million compensation paid.

"This is false. It never happened. And X17 had to know that the story was false, or, at the very least, it had to have entertained serious doubts about the credibility of its supposed source," the lawsuit said.

The lawsuit also alleged that X17 never contacted Parker, Longoria nor their representatives before running the stories, and refused to retract them after being told the claims were false.

An after-hour call to X17's Beverly Hills office was not immediately returned.

Last week, the Web site posted a story that said the model Alexandra Paressant told X17 that she had a two-month affair with Parker. The story said Paressant told X17 she attended Parker's wedding last summer, where the French soccer star Thierry Henry introduced her to the basketball star.

"No one from X17 attempted to contact Mr. Henry, who ... would have told them in no uncertain terms that this woman was not at the wedding," the lawsuit said, adding that Parker has never met anyone named Alexandra Paressant.

"If this woman exists, he has no way of knowing whether she is one of the many fans who have, from time to time, managed to obtain his cell phone number and called or left messages or who may have engaged him in conversation," the suit said.

Parker, who was born in Belgium and raised in France , is seeking damages for defamation and invasion of privacy. The lawsuit is also seeking a court injunction ordering X17 to stop publishing the stories.

"I love my wife," Parker said in a statement from Longoria's spokeswoman, Liza Anderson. "She's the best thing in my life, and I have never been happier."

"Tony has been nothing short of the perfect husband," said Longoria.