Bitter pill for democrats: House to vote on 70B dollars for Iraq and Afghanistan 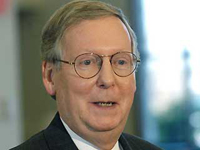 Bitter pill for democrats: House to vote on 70B dollars for Iraq and Afghanistan

The Democratic-controlled House of Representatives is expected to approve $70 billion (EUR48.56 billion) for U.S. military operations in Afghanistan an Iraq – President George W. Bush should be satisfied.

The Iraq funds have been bundled into an omnibus appropriations measure providing funds for domestic agencies whose budgets are set each year by Congress. Bush said he would sign the massive $555 billion ( EUR385 billion) package. Senate improved it on Tuesday, the AP reports.

As for democrats, they sent the Senate a bill limited to $31 billion ( EUR21.5 billion) for U.S. operations in Afghanistan – that is mush more supported than the unpopular war in Iraq .

But the effort was doomed. The first obstacle was a Bush veto promise. The second was a filibuster by Senate Republicans.

The measure was rewritten on Tuesday night be the Senate. The combined Iraq and Afghanistan funding was dropped in the House's lap as one of the last votes before most senators left Washington for the year.

"Even those of us who have disagreed on this war have always agreed on one thing: Troops in the field will not be left without the resources they need," leader of the Senate's Republican minority Mitch McConnell said.

The vote represented reluctance in both parties to take money away from troops in the field. At the same time, anti-war Democrats' positions had been weakened by the decline in violence in Iraq following the increased tempo of U.S.-led military operations there.

Democrats again failed to win votes to force a removal of U.S. troops or set a nonbinding target to remove most troops by the end of next year.

Democrats and Republicans had also been divided for months over domestic agency budgets, and Wednesday's vote would seal a deal between the two sides.

In rapid succession, the Senate cast two votes to approve the hybrid spending bill. By a 70-25 vote, the Senate approved the Iraq and Afghanistan war funds - without restrictions that Democrats had insisted on for weeks. Senators followed with a 76-17 vote to agree to a bundle of 11 annual appropriations bills funding domestic agencies and the foreign aid budget for the 2008 budget year that began Oct. 1.

The House vote Wednesday was to ready the entire package for Bush, though the vote was only on the Iraq portion of the measure.

-$15.7 million (EUR10.9 million) for Indonesia, matching the Bush administration's request for a country it sees as crucial to fighting terrorism in Southeast Asia.

Part of the money is conditional on improvements in human rights protections in both countries. In the South Asian nation of Sri Lanka, almost all aid is cut off unless the government produces evidence of significant improvements in its rights record.