The Vatican approved of the U.N. vote calling for a moratorium on death penalty. 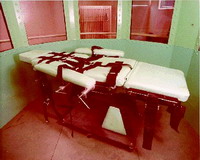 "It shows that despite persistence of violence in the world, an awareness of the value of life ... is growing in the human family," the Rev. Federico Lombardi, a Vatican spokesman, said on Vatican Radio. "This vote is interpreted as a sign of hope and a step forward on the road to peace."

The Holy See's representative to the United Nations noted Italy's leadership role in gathering support for the initiative.

"Italy played an important role ... because it was able to involve the whole world, not just Europe," said papal representative the Rev. Celestino Migliore.

Italian Prime Minister Romano Prodi called it "a historic day," and underlined Italy's pride at having played a role in the passage of the moratorium. "Italy contributed much to the spread of peace and justice in the world," Prodi told reporters.