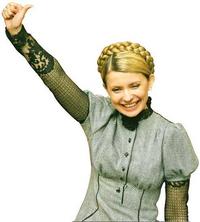 Tymoshenko got 226 votes - the bare majority needed in the 450-member parliament - from deputies in her bloc and the party of President Viktor Yushchenko. Tymoshenko and the president formed a majority coalition after this fall's elections, despite frequent tensions between the two.

Before the vote in the Verkhovna Rada, Tymoshenko declared that the coalition was solid.

"You have two patriots in politics who will hold this flag up high and never drop it. Today's vote is a moment of truth for the democratic coalition," she said.

However, the vote count indicated the difficulties ahead for the Yushchenko-Tymoshenko coalition. The opposition dominated by the Party of Regions, which is led by pro-Russia former prime minister Viktor Yanukovych, is in strong position to fight initiatives by the Western-leaning reformist coalition.

Loyalties switch frequently in Ukrainian politics and an attempt to return Tymoshenko to the premiership in 2006 derailed when a formerly allied party crossed over to join a coalition with Party of Regions.

Tymoshenko was the most energetic and vivid figure of the 2004 Orange Revolution mass protests that helped power Yushchenko into the presidency. The protests broke out after a fraud-plagued presidential election in which Yanukovych was declared the winner. The Supreme Court annulled the election and Yushchenko won the rerun.

The Orange Revolution left her and Yushchenko in deep opposition to Yanukovych.