Venezuela to open Simon Bolivar's coffin to investigate his death

To warrant a full investigation of independence hero Simon Bolivar’s death in 1830, President Hugo Chavez announced that Venezuela should open his coffin. 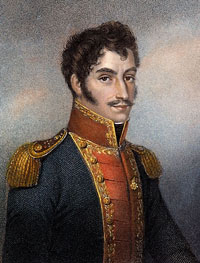 Venezuela to open Simon Bolivar's coffin to investigate his death

Although history books maintain Bolivar died of tuberculosis, Chavez said doubts exist because some writings suggest it is possible the South American "Liberator" might have been murdered, the AP reports.

Chavez has raised this theory before, but went further during a speech on the anniversary of Bolivar's death.

"Who knows if they even made Bolivar's bones disappear? We have to determine it now," Chavez said. "We have the moral obligation to dispel this mystery, to open ... this sacred coffin and check the remains."

Chavez said it is possible Bolivar was poisoned, even though according to the traditional history Bolivar spent his last days bedridden and dying. He suggested modern "scientific advancements" - apparently DNA testing - could help determine if the remains entombed in the National Pantheon in Caracas are indeed Bolivar's.

"I swear I will not rest in the search for the real truth," Chavez said, pledging "an investigation with all the resources Venezuela can offer."

Bolivar, who liberated from Spain what is now Venezuela and several other South American countries, is an idol to Chavez and the inspiration of his Bolivarian Revolution movement.