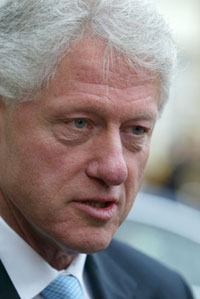 He should know - that's a fair description of Clinton when he sought the presidency in 1992.

The fact that the former president is stealing a page from the same Republican playbook used against him 15 years ago underscores the threat Obama poses to the candidacy of Clinton's wife, Sen. Hillary Rodham Clinton of New York, the AP reports.

"Even when I was a governor and young and thought I was the best politician in the Democratic Party, I didn't run the first time. I could have," Clinton said on the Public Broadcasting Service's "The Charlie Rose Show," referring to the 1988 presidential campaign.

"And I had lots of Democratic governors encouraging me to. I knew in my bones I shouldn't run - that I was a good enough politician to win, but I didn't think I was ready to be president," Clinton said.

While there may be some truth to that statement, Clinton did not seem at the time to lack confidence in his abilities as a governor or a potential president. He was worried about rumors of infidelity, some of which were investigated by his own staff, and privately expressed doubts about whether he could win in 1988.

"He's being a little disingenuous," said Art English, a political science professor at the University of Arkansas at Little Rock .

Clinton was 42 in 1988, four years younger than Obama is now. Already one of the nation's longest serving governors, Clinton had a limited number of accomplishments between 1988 and 1992 that added to his depth of experience - other than winning a fifth term as Arkansas governor while promising not to seek the presidency before his term expired.

He broke that promise.

As a first-time presidential candidate, Clinton cast himself as an "agent of change" in troubled times, and faced criticism from Republicans about his youth and inexperience.

Obama finds himself in the same boat, with Clinton manning the torpedoes.

"If you listen to the people who are most strongly for him, they say basically 'We have to throw away all these experienced people because they have been through the wars of the '90s and they made enough decisions and enough calls that they made a few mistakes. And what we want is somebody who started running for president a year after he became senator because he's fresh, he's new, he's never made a mistake, and he has massive political skills. And we're willing to risk it,"' Clinton told Rose.

He called Obama an "enormous talent" in the way a boss condescends to a scrappy new intern.

There is a fair case to make that Obama is not ready for the presidency.

Less than four years removed from serving in the state Senate, Obama cannot point to more than a decade in the governor's office as could Clinton . He was not a war hero, as was a young presidential candidate from another era, John F. Kennedy. And he did not serve first as vice president, as did the 40-something Teddy Roosevelt.

Even his admirers in Springfield have their doubts about Obama.

"The unknown is the administrative and foreign policy experience," said Sen. Kirk Dillard, a Republican who supports Obama.

Obama knows that he is asking voters to take a leap of faith.

"... People have to feel comfortable that, 'You know what? This guy can handle the job,"' he told The Associated Press last summer. "It's a stretch for them because I haven't been on the national scene for long and haven't gone through the conventional paths that we traditionally draw for our presidents, so they've got to stretch a little bit during a period where there's a lot of stuff going on internationally, right?"

He said at the time his challenge was to define experience as something more than service in Washington or a state capital. He needed voters to take the full measure of his life, his judgment and his style, Obama said, because if the race turns into a battle of resumes, he loses.

So it was no surprise that Obama was ready to respond to the former president's criticism.

"Here's a quote," Obama said with a smile. "'The same old experience is irrelevant. You can have the right kind of experience or the wrong kind of experience. And mine is rooted in the real lives of real people, and it will bring real results if we have the courage to change."'