Unlike her rival Barack Obama, who turned to celebrity in his pre-election campaign, Hillary Clinton brought her 88-year-old mother to support her party. 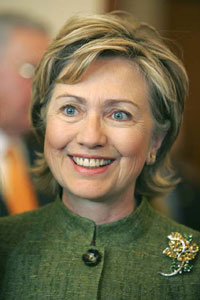 Clinton , locked in a tight race with Obama and former Sen. John Edwards in the state's leadoff caucuses, planned a two-day series of grass-roots events encouraging people to "bring a buddy" to the Jan. 3 caucuses.

"I wanted to bring a buddy with me so I brought my mother, Dorothy Rodham," said Clinton . "She lives with Bill and me and she's been following the campaign very closely. She has a lot of questions that I try to answer."

Continuing the family focus, Clinton's campaign announced that her former president husband Bill will return to the state on Monday to stump on her behalf. Hillary Clinton opened her latest presidential campaign swing at a Des Moines high school where she held her first campaign event in Iowa nearly a year ago.

With the opening event of the nominating season less than four weeks away, all of the leading rivals are beginning to focus on generating turnout at those caucuses, likely to be decided by about 150,000 Democratic activists.

Obama was grabbing the lion's share of the attention over a hectic political weekend, opening a campaign swing on Saturday with talk-show maven Oprah Winphrey, making two stops in Iowa and then stops in New Hampshire and South Carolina , also early voting states.

Clinton sought to counter that by bringing along her mother, a move aimed at underscoring the human side of a candidate viewed by many as cold and calculating. She regaled her audience about a family trip her siblings and parents made to Iowa 53 years ago, recalling that they stayed at a place called the Tall Corn Motel.

"I want to thank you for being here, mom," said Clinton . "Thanks for coming back to Iowa with me."

Iowa's precinct caucuses are far different from a traditional primary, essentially neighborhood meetings in all of the state's nearly 2,000 precincts where activists must publicly declare their allegiance and bargain with their neighbors over electing delegates to the next phase in the process. Many who have not taken part in caucuses are intimidated by that public process, and the thrust of Clinton's campaign is to convince backers to actually take the plunge and go to a caucus.

"Caucusing is more fun with a friend and you need to bring a buddy to caucus," said Clinton . "The caucuses are easy and we will help you understand what to do."

The race for Iowa's leadoff precinct caucuses has stayed tight, with very high consequences for the race. Clinton holds a solid lead in many of the other early voting states, and some strategists see little chance of denying her the nomination if she can win in Iowa , her toughest early state.

In addition to offering a human side, Clinton was peppering her campaign rhetoric with more heat.

"We need a president who wakes up every morning thinking about what's really going on in America ," said Clinton . "We need to lead again with our values so we can be proud of our country."

Her core argument against Obama is that she has more experience than a first-term member of the Senate, but that was relegated to a brief reference in her opening campaign event.

"They know that change is just a word if you don't have the strength and experience to make it happen," said Clinton .

Her husband was focusing heavily on college campuses in next week's trip, targeting a group that Obama has worked hard. Obama has made a concerted effort to increase the number of young people showing up for caucuses while Clinton has sought to bolster the number of women supporters show up.

She has prepared a slick video featuring her husband and former Iowa Gov. Tom Vilsack seeking to "demystify" the Iowa caucus process, and that video is now an opening staple of her campaign as she begins focusing on crucial turnout efforts,

In her speech, Clinton said her mother would accompany her throughout the weekend. Dorothy Rodham did not speak, and was assisted from the stage after being introduced.