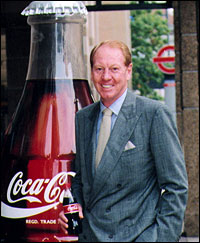 Coca-cola’s president and chief operating officer, Muhtar Kent, will take place of Neville Isdell when he steps down as CEO on July, 1.

Isdell will remain chairman of the board until the company's annual meeting in April 2009.

"We have accomplished a great deal in the last three and a half years, and I recognize my responsibilities - to the company and to Muhtar - remain unfinished until Muhtar is successfully launched as CEO," Neville Isdell said in a statement. "Management succession is the key final measure of any CEO's success, and I will do all I can to ensure our progress is secure for many years ahead."

As COO, Kent has overseen a number of significant initiatives, including the acquisition of glaceau earlier this year. He will continue to hold the title of president.