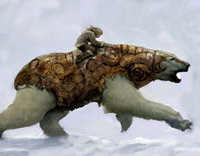 "After getting a handful of calls from parents worried about the themes and messages in the book that would conflict with the Catholic faith, we've taken it off our shelves to assess its suitability for our students," board spokeswoman Tania Younker said. The board oversees 103 Catholic schools.

The book, part of a trilogy written by self-described atheist Philip Pullman, has been criticized as being anti-Catholic and anti-religion. Others say it is merely anti-establishment

The "Golden Compass" was voted the best children's book in the past 70 years by readers around the world in June, with online voting based on a selection of 10 past winners of the Carnegie Medal for children's literature.

But in October, the Catholic League for Religious and Civil Rights in the U.S. criticized Pullman's trilogy for bashing Christianity and promoting atheism. The organization urged parents to boycott the movie.

The Halton Catholic board in Ontario recently announced it would pull the book from library shelves.

The Roman Catholic school board in Calgary has not banned the books, but is having it reviewed by administrators and instructors.

However, not everyone in Calgary's Catholic community agreed with the move.

Younker said the school board aligns with his stance, but a review is still needed.

"Our children are exposed to a wide range of information," board spokeswoman Judy Mackay said. "One of our responsibilities is to help them understand how that fits with their belief system and to equip them with skills so that they understand how they can fit that into their own belief system."