One or more people attacked Cardinal Roger Mahony apparently angered by the Roman Catholic Church's sexual-abuse scandal last summer, according to priests who say they have heard him discuss the assault. 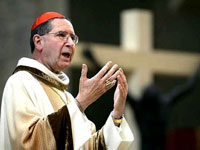 Mahony, 71, told the priests about the attack during a conference in October, said the Rev. Joseph Shea, pastor of Holy Family Catholic Church in Glendale. The cardinal said it occurred in late July or early August as he was dropping off letters at a mailbox near Our Lady of the Angels Cathedral in downtown Los Angeles, Shea said.

"The comments people made as they kicked him were connected to the sexual abuse lawsuits," he told The Associated Press.

Shea said Mahony was so badly beaten that the cardinal was hospitalized, and that it took him weeks to recover.

"Whatever conversation might have taken place between the priests and their bishop was a private conversation and not meant to be public," Guevara said.

Shea said Mahony did not report the attack to police "because he felt he could offer it up in reparation for the sins of others."

Police Department Lt. Roger Mora said he had no knowledge of the apparent assault, which was first reported by the Los Angeles Daily News on Tuesday.

The Rev. Sal Pilato, principal at Junipero Serra Catholic High School in Gardena, who was also at the conference, told the Daily News that Mahony's account was "shocking because it was an act of violence and it was someone we know and respect."

Mahony came under fire from victims and attorneys who said he moved sexually abusive priests to different parishes.

Church officials have said Mahony tried to reach out to victims, meeting with many of them and their families.