Battle for custody between Britney Spears and her ex-husband Kevin Federline is in full swing. Child welfare investigators are looking into "multiple child abuse and neglect" allegations. 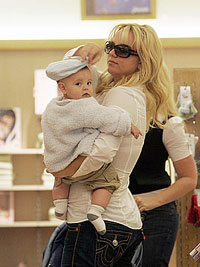 In a request to unseal parts of the case file, an attorney for the Los Angeles County Department of Children and Family Services wrote that there are concerns about the safety and welfare of the two toddlers, Sean Preston, 2, and Jayden James, 1, if they are left in their mother's care.

Though the agency mentioned investigating referrals relating to Federline, the documents do not provide details.

After-hour calls to attorneys representing Spears and Federline were not immediately returned.

The agency requested the court not alter the current custody and visitation arrangements until their investigation is completed. Federline has temporary custody of the boys after Spears defied court orders about regular drug testing.

The latest tidbits on the custody battle are in 300 pages of documents released Tuesday by Los Angeles Superior Court Commissioner Scott M. Gordon.

The document dump included previous court rulings, expense reports and income statements for both parents, the names of the custody evaluators selected by Spears' and Federline's attorneys and their detailed resumes.

Spears had asked the court to seal the custody and visitation schedules in a declaration filed in October, arguing that "such information greatly increases the chances that the actions of the media could threaten the safety of the children by, for example, causing a traffic accident."

Spears, whose every errand is trailed by a mob of celebrity photographers, is notorious for distracted driving. She is under investigation for injuring a sheriff's deputy while exiting the downtown courthouse in her white Mercedes.

In 2006, she was photographed driving with her son on her lap.

In October, she pleaded not guilty to a misdemeanor charge of driving without a valid driver's license and later obtained a temporary California license.

A misdemeanor hit-and-run charge from an August parking lot crash was dismissed after she paid an undisclosed amount to the car's owner.

Spears pays Federline $15,000 ( EUR 10,175) per month in child support, and previous court rulings have said that he currently has no income.