A transgender city council member lost a re-election bid as the court claimed she misled voters by identifying herself as a female. 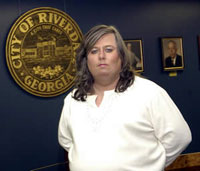 Michelle Bruce said that even though a judge dismissed the lawsuit the day before the vote, the suit served its intended purpose.

"It was a personal attack," said Bruce, who was seeking a second term. "It was aimed at getting me out."

Bruce, 46, landed one of Riverdale's four council seats in 2003 after running unopposed. She was believed to be the state's first transgender politician. She has declined to say if she had surgery to change her gender.

Bruce captured 312 votes in the Nov. 6 election, not enough to avoid a runoff against Wayne Hall, who earned 202 votes. Third-place finisher Georgia Fuller, who collected 171 votes, filed a lawsuit.

The complaint, identifying Bruce as "Michael Bruce," claimed she misled voters by identifying herself as a female and asked a judge to rule the vote results invalid and order another general election.

Fuller's attorney, Mike King, said at the time the lawsuit was filed that the female name gave Bruce an "unfair advantage" because the town's voters tend to vote for females - particularly incumbents. King could not be reached for comment Tuesday night.