Prince Charles and his wife Camilla visited the mausoleum of one of Islam's greatest mystic poets Mavlana Jalal al-Din al-Rumi and enjoyed the traditional whirling dance of dervishes. 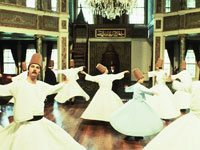 The British prince and Camilla, the Duchess of Cornwall, are on a four-day tour of historic sites in Turkey that will also take them to the cities of Ankara, Izmir and Istanbul.

In Konya, central Turkey, they visited the mausoleum of the 13th Century poet Mavlana Jalal al-Din al-Rumi, who is considered to be the father of Sufism - the mystical form of Islam that preaches tolerance and love.

The two gazed at handwritten books, costumes and verses of the Quran painted on the ceiling.

Prince Charles and the duchess later watched dervishes whirl in a traditional trancelike meditation, called sema, one palm turned up toward heaven, the other turned down toward earth.

In a speech after the sema ceremony, the prince said: "What better place then here near the resting place of (Rumi) to rededicate ourselves to the purpose of reacquiring an understanding heart and a rebalance of the East and West in ourselves."

Later, the heir to the British throne and his wife traveled to Catalhoyuk, some 40 kilometers (25 miles) southeast of Konya, to visit the 9,000-year-old Neolithic settlement that is being excavated by a British-led archaeological team.

On Tuesday, they will visit a military rehabilitation center in Ankara for veterans who fought Kurdish rebels in the country's southeast and dine with President Abdullah Gul at the presidential palace.

Prince Charles last visited Turkey in April 2005 when he attended the 90th anniversary of the disastrous World War I Gallipoli campaign in which some 300,000 soldiers were killed.