Rhode Island nightclub fire draws plenty of blame to go around for a fire that killed 100 people. 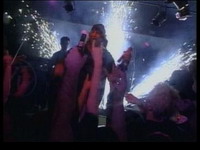 Al Prudhomme and other survivors and victims' relatives have sued 90 people and businesses in all.

"It's not any one person," said Prudhomme, whose band Fathead performed at The Station nightclub in West Warwick, Rhode Island, before Great White took the stage with a pyrotechnic display that triggered the fire. "It's a collaboration of mistakes by people."

The plaintiffs blame Anheuser-Busch and its local distributor for helping promote the show. They blame Clear Channel Broadcasting, saying one of its radio stations advertised the show and one of its disc jockeys was master of ceremonies that night.

They blame several foam manufacturers, saying the manufacturers made the flammable foam that was affixed to walls of the club for soundproofing. West Warwick town officials are blamed for failing to correct the club's shoddy conditions, and the fire marshal who admitted overlooking the foam during multiple inspections.

Fingers also are pointed at the previous club owner, members of Great White and even a TV cameraman who was there as the fire began.

The lawsuits cast a wider net. The consolidated federal case names about 90 defendants, some of whom are related companies and a few of whom have been dismissed.

"Criminally, you can't go after a foam company that maybe has much more indirect involvement," said Michael St. Pierre, another lawyer for the victims' families.

Legal experts also say it makes sense for the survivors and families to sue those with deep pockets. It is unlikely anyone could get much money from the men convicted: The Derderians filed for bankruptcy and Biechele presumably is not wealthy.

"Your claim is only as good as the defendants' assets," said Niki Kuckes, a law professor at Roger Williams University. "You could have somebody who has an enormous amount of fault in the thing and has no money. So if you sue them and you win, all you get is a moral victory."

In recent months, a handful of defendants have reached tentative settlements totaling $18.5 million (12.49 million EUR), and lawyers are hoping for more agreements. But many other defendants dispute they had any part in what happened that night, and they are fighting to get out of the case.

Anheuser-Busch says it did not promote or sponsor the band, had no control over the concert and should never have been sued.

Foam companies say no one has proved they made the foam that lined the club's walls and ignited so quickly, and Clear Channel says it had nothing to do with Great White's use of pyrotechnics and had no responsibility for the club's conditions.

"The fire was a terrible tragedy, and there is an understandable desire to try to compensate its unfortunate victims," Clear Channel lawyers wrote in court papers earlier this year. "But legal responsibility for injuries cannot be, and never has been, equated solely with the desire to compensate, no matter how compelling."