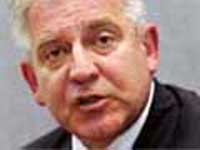 Celebrities were supporting Prime Minister Ivo Sanader and huge amounts of money were invested in his campaign ahead of Sunday's parliamentary elections.

Yet all that may not be enough for his conservative party to stay in power.

All recent surveys show that Sanader's Croatian Democratic Union is tied with - or even trailing - the opposition center-left Social Democrats, who have benefited from Sanader's failure to substantially improve living standards and root out corruption.

Neither party is expected to win a majority, and the outcome will likely depend on postelection dealmaking.

The one apparent certainty: Croatia's pro-Western stance, which set it on course to join the European Union as early as 2010, will not change.

Crucially, the nationalists, Croatia's main political force in the 1990s, are marginalized. Moderates are all but certain to hold power no matter what the result.

"It is almost the same which of the two will win," political analyst Jelena Lovric said. "Both would fairly decently lead Croatia."

The vote can, finally, go on "without a spasm, almost relaxed," she said.

Two polls published Friday show the Social Democrats leading with 33-35 percent of those surveyed. Sanader's party, known by its acronym HDZ, was trailing by between one and three percentage points. But Sanader could add votes from Croats living abroad, who were not interviewed. And a third poll, released two days ago, showed HDZ leading, with 34 percent of votes.

HDZ has ruled Croatia for most of the time since the 1991 declaration of independence from Yugoslavia, which triggered a war with the country's minority Serbs, which ended in 1995. Croatia in that era was a bastion of nationalism, shunned by the West.

HDZ returned to power in 2003, and Sanader has continued the nation's pro-Western makeover.

Croatia opened EU membership talks in 2005 after helping to capture top Croatian war crimes suspects. It will become a non-permanent member of the U.N. Security Council on Jan. 1.

Now, the top goal of both HDZ and the Social Democrats, or SDP, is EU membership. Both also advocate membership in NATO, although the SDP would put that to a referendum. Friendly relations with Washington seem certain to continue.

Both pledge to focus on the key domestic issues preoccupying most Croats: reviving the economy, stamping out unemployment, raising salaries.

Unemployment is still at about 14 percent; the average monthly wage is 4,900 kuna (EUR670; US$980). Inflation is at about 4 percent and prices of basic needs - energy and food - have steadily risen. Both the people and the state are living on borrowed money - raising internal and foreign debt.

Corruption remains widespread: the EU recently warned Croatia that it needs to tackle graft seriously if it wants its membership bid to go forward. The Social Democrats accuse Sanader's party of failing to fight graft "because corruption is its way of ruling."

Sanader has won endorsements from the 2001 Wimbledon champion Goran Ivanisevic and the entire Dinamo soccer team. German chancellor Angela Merkel, a fellow conservative, tells Croats in an ad that there are "many good reasons" to vote for Sanader.

The Social Democrats can count on the support of two or three leftist parties. Sanader may need the votes of Croats living abroad to stay in power.