At least 13 lawyers were killed and dozens more were injured in near-simultaneous explosions that ripped through courthouse complexes in three north Indian cities. 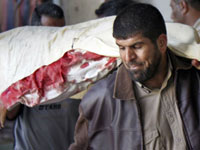 Federal authorities blamed militants trying to spark unrest between India's Hindu majority and Muslim minority, though a legal group noted all the blasts came in a state where lawyers had decided not to defend terrorism suspects.

At least nine lawyers were killed and 45 more people were injured in three explosions in Varanasi, one of Hinduism's holiest cities, said Mayawati, the top elected official of Uttar Pradesh state, where all three cities are located. She uses only one name.

At least two of those bombs were attached to bicycles, police said.

In Faizabad, a pair of bombs killed four lawyers and injured about 14 others, Mayawati told reporters in Lucknow, the state capital. One of the bombs was rigged to a motorcycle, said R.N. Singh, a local police officer. Faizabad is near the town of Ayodhya, where Hindu extremists destroyed the 16th century Babri Mosque in 1992, sparking widespread Hindu-Muslim riots.

Most of the injured were lawyers, officials said.

There was one explosion in Lucknow but no reports of deaths or injuries there.

Mayawati criticized federal intelligence agencies for failing to anticipate the attacks. "There was no warning to us from the federal government," she said.

Vipin Mishra, spokesman for the state's Home Ministry, said the blasts went off less than 15 minutes apart inside court complexes.

B.K. Saksena, a lawyer in Lucknow who escaped unhurt, said proceedings were halted for the day after the explosion there.

"It was lunchtime and most lawyers were standing outside (the courtrooms). When the explosion happened, there was utter panic and people were running everywhere," Saksena said.

Indian court complexes are crowded, chaotic places, with lawyers often setting up small outdoor "offices" in makeshift, open-walled shacks built in courtyards. Many of the bombs apparently went off in such courtyards.

"It's a conspiracy ... this is the handiwork of some group that wants to disturb communal harmony in the country," the junior federal home minister, Sriprakash Jaiswal, told reporters. "They may have targeted the courts because large crowds gather in courthouses here."

But Padam Kriti, a spokesman of the Uttar Pradesh Bar Association, said the state's lawyers had decided earlier this year not to defend any terror suspects, and "it looks like" that decision may have been behind blasts.

Indian Prime Minister Manmohan Singh, who was attending a summit of Commonwealth leaders in Uganda, issued a statement condemning the blasts and expressing sympathy to the victims.

In New Delhi, the U.S. Embassy also condemned the attacks.

"Such acts strengthen the resolve of all well-intentioned people, including India's friends in the international community, to defeat terror and build peace based on the rule of law," it said in a statement.

A series of terrorist bombings have ripped across India in the past two years. In August, a pair of explosions killed 43 people in the southern city of Hyderabad. In July 2006, bombs in seven Mumbai commuter trains killed more than 200 people.

Lal Krishna Advani, the leader of the opposition Hindu nationalist Bharatiya Janata Party, said in India's Parliament that "the attacks were an intelligence failure."