Eight bodies of non-Albanians killed in the aftermath of the 1998-99 war in Kosovo were handed over to Serbia. 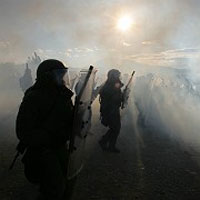 The victims were exhumed and identified as part of efforts to track down hundreds of missing from the Kosovo conflict between the Serbian security forces and ethnic Albanian separatists.

The war erupted in 1998 when Kosovo rebels launched an uprising to split the region from Serbia, triggering a brutal onslaught from the Belgrade military and police.

Serbia's bloody response in return prompted NATO to bomb the country until, 78 days later, Serbia ended the crackdown and pulled out of the province. That paved the way for a NATO and U.N. deployment.

About 10,000 people are believed to have been killed in Kosovo. Hundreds are still missing, years after the conflict.

Serbian government official Veljko Odalovic said that the victims whose bodies were handed over Friday, were killed after the international deployment in Kosovo in June 1999.

Serbia also has handed over to Kosovo hundreds of bodies of the Albanian victims whose remains were transferred to central Serbia during the war to cover up the crimes, and later unearthed here.

Serbia's President Boris Tadic said Friday that resolving the issue of the missing and the war crimes committed in Kosovo, was crucial for reconciliation.

"I expect both Serb and Albanians will search for the missing and for those responsible for the crimes, because that is the precondition for good relations," Tadic said.

The decades-long Serb-Albanian dispute over Kosovo remains unresolved. Two-year talks on the issue so far have produced no result.

Albanians insist on independence, while Serbia refuses to let go of its historic heartland, offering high-level autonomy instead.