Saakashvili expected to be nominated as candidate for early elections 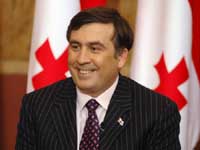 Saakashvili expected to be nominated as candidate for early elections

Georgian President Mikhail Saakashvili is expected to be nominated as his party’s candidate in an early election in January.

It was four years to the day after peaceful protests led by Saakashvili forced the resignation of his predecessor.

The United National Movement was expected to formally nominate Saakashvili at a party congress coinciding with celebrations of the 2003 Rose Revolution, which ushered him to power, and a major religious holiday in the predominantly Orthodox Christian ex-Soviet republic.

After his government chased protesters off the streets in a harsh crackdown earlier this month, Saakashvili called for a presidential vote Jan. 5 - a bid to outfox his opponents and defuse the strongest challenge to his tenure since his landslide election following the Rose Revolution.

In a campaign-style speech to more than 10,000 supporters at the congress in a sports arena, Saakashvili said Georgia was facing "a moment of truth - a crucial moment for every one of us."

Saakashvili, whose term had not been slated to end until early 2009, called the early vote as a concession to opposition forces, who mounted persistent protests in early November. Their demands for changes in election schedules became overshadowed by calls for his resignation.

Saakashvili responded with a crackdown in which riot police used truncheons, tear gas, water cannon and rubber bullets to sweep thousands of demonstrators off the streets. Hundreds were injured, and the violence deepened disappointment among many Georgians.

But the poll date leaves the opposition little time to capitalize on a groundswell of public discontent.

Saakashvili's critics say he has become increasingly authoritarian, and the enthusiasm that handed him a landslide victory in the election after the Rose Revolution has faded amid economic hardship and corruption, which has persisted despite his reform efforts.

Saakashvili told the party congress his government will focus on improving living standards so that "every person, every family feels improvements in their lives."

Pensions will be raised Dec. 1, he said.

Saakashvili also emphasized commitment to building close ties with the United States and regaining control over two separatist regions - goals most of his opponents support.

"My life and the lives of my colleagues would lose all meaning if we cannot unite Georgia and integrate the country with Euro-Atlantic structures," he said.

Saakashvili is seeking NATO membership for Georgia and trying to lessen the influence of its giant neighbor Russia, which he claimed was behind the recent opposition push.

The congress was held amid celebrations to mark the Rose Revolution anniversary and a religious holiday honoring St. George, considered the patron saint of the Caucasus Mountain nation. Churches held services Friday, and outdoor concerts were planned in the evening.

In a ceremony laden with anti-Moscow symbolism, Saakashvili presented visiting Polish President Lech Kaczynski with Georgia's highest state award, the St. George medal. He said he was honoring Polish struggles against the Soviet government in the 1920s and 1930s.

St. George "did not have great physical might, but by strength of will defeated foes including the most powerful empire and emperor," Saakashvili said.

He was also to meet with Lithuanian President Valdas Adamkus. Poland and Lithuania, formerly in the Soviet sphere but now European Union and NATO members, are strong supporters of Saakashvili's pro-Western course.

In a trademark grand gesture, Saakashvili signed an amnesty decree ordering the immediate release of 772 prisoners, and lawmakers said parliament would consider his calls to free more than 2,000 others soon.