The U.N. weather agency reported that greenhouse gases in the atmosphere in 2006 were higher than ever. Carbon dioxide is now contributing more to global warming. 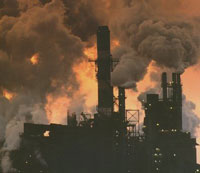 The global average concentrations in the atmosphere of carbon dioxide, or CO2, and nitrous oxide, or N2O, were higher than ever in measurements coordinated by the World Meteorological Organization, said Geir Braathen, a climate specialist at the Geneva-based agency.

Methane, the third of the three important greenhouse gases, remained stable between 2005 and 2006, he said.

"CO2 as a greenhouse gas is getting more and more important," he told reporters.

CO2 contributed 87 percent to the warming effect over the last decade, but in the last five years alone, its contribution was 91 percent, Braathen said. "This shows that CO2 is gaining importance as a greenhouse gas," Braathen said.

The concentration of carbon dioxide in the atmosphere rose by about half a percent last year to reach 381.2 parts per million, according to the agency. Nitrous oxide totaled 320.1 parts per billion, which is a quarter percent higher than in 2005.

Braathen said it appears the upward trend will continue at least for the next few years.

Studies have shown that human-produced carbon dioxide emissions heat the earth's surface and cause greater water evaporation. That leads to more water vapor in the air, which contributes to higher air temperatures. CO2, methane and N2O are the most common greenhouse gases after water vapor, according to WMO.

They are produced partially by natural sources, such as wetlands, and partially by human activities like fertilizer use or fuel combustion.

There is 36.1 percent more carbon dioxide in the atmosphere than there was in the late 18th century, primarily because of combustion of fossil fuels, the WMO bulletin said.

A report presented by a U.N. expert panel said last week that average temperatures have risen 0.74 degrees Celsius (1.3 Fahrenheit) in the last 100 years, with 11 of the last 12 years among the warmest since 1850. Global Warming also led to a sea level increase by an average seven-hundredths of an inch per year since 1961, according to the U.N. Intergovernmental Panel on Climate Change.

The panel's report, which said human activity is largely responsible for global warming, noted that the concentration of carbon dioxide in the atmosphere is far higher than the natural range over the last 650,000 years.

The WMO also concluded that "Greenhouse gases are major drivers of global warning and climate change."

It has said power plants, automobiles, ships and airplanes using coal, oil or gas are contributing to the rise in carbon dioxide emissions.

WMO said it based its findings on readings from 44 countries that were collected in Japan.

The U.N. Intergovernmental Panel on Climate Change forecast that by 2020, 75 million to 250 million people in Africa will suffer water shortages, residents of Asia's large cities will be at great risk of river and coastal flooding, Europeans can expect extensive species loss, and North Americans will experience longer and hotter heat waves and greater competition for water.