Saudi Arabia didn't support declaration of any concern about the weakened U.S. dollar in an upcoming OPEC declaration, warning that doing so could further hurt the currency's value. 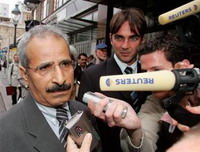 Iran, backed by Venezuela, was pressing for the final declaration of an OPEC summit here this weekend to cite concerns about the declining dollar, which some OPEC officials have blamed for increasing oil prices.

"My feeling, the mere mention that the OPEC countries are studying the issue of the dollar is itself going to have an impact that endangers the interests of the countries," Saudi Foreign Minister Saud al-Faisal said during a meeting of with fellow ministers from the Organization of Petroleum Exporting Countries ahead of a weekend summit in the Saudi capital, Riyadh.

"This is not new. We have done this in the past, decide to study something without putting down on paper that we are going to study it so that we avoid any implication that will bring adverse affect our countries' finances," he added.

Some OPEC officials have blamed the depreciating dollar on rapidly rising oil prices and have expressed concern about the effect on the value of their dollar reserves. However, mentioning this concern in a public declaration could depress the value of the dollar even further.

"We all should be worried if any action that we take will lead us to do some injury to our returns on our product," said al-Faisal. "Nobody wants to have less money than more money. I am sure that we all agree on that."