Official information showed that at least 15 people were killed in Myanmar's biggest city when September's pro-democracy demonstrations were crushed by the military. 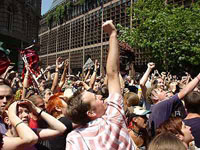 The U.N.'s Paulo Sergio Pinheiro told a news conference that the figure was not necessarily complete and that he did not know how many other people may have been killed in other parts of the country.

One of the main purposes of Pinheiro's visit was to determine the number of people killed and detained in the September crackdown.

Pinheiro said that he would give as complete an accounting as possible only after drafting a formal report, and would present his findings to the U.N. Human Rights Council in Geneva on Dec. 11.

It was the first trip the junta allowed the Brazilian professor to make to the country in four years.

Myanmar's military government originally said 10 people were killed when troops opened fire on crowds of peaceful protesters on Sept. 26-27. Diplomats and dissidents, however, said the death toll was much higher.

Pinheiro said the authorities gave him post-mortem reports on 14 people whose bodies had been sent from Yangon General Hospital to be cremated. He said the 15th known fatality in the crackdown was Japanese journalist Kenji Nagai, who was shot dead by security forces.

"This is just in Yangon," Pinheiro said. "The government has not told me all the casualties in the country." He added that he would continue seeking relevant information from other sources.

Pinheiro said the government told him it had detained almost 3,000 people in connection with the crackdown, a figure previously announced. The military says it has released most of them, but many prominent political activists remain in custody.

"Of course, I am happy that large numbers of people have been released, but I have my concerns about the situation of those who have not been released," Pinheiro said in Yangon on Thursday.

The party said the authorities had freed more than 150 convicts from two prisons, but the others were common criminals.

On Thursday, Pinheiro was allowed to meet with several prominent political prisoners at Yangon's infamous Insein Prison. He described the facility, which holds about 10,000 prisoners, as being "old and overcrowded." He also said the prisoners there needed medical treatment.

Pinheiro said he had one-on-one meetings with five political prisoners. They included labor activist Su Su Nway, arrested Tuesday as she tried to place a leaflet near a Yangon hotel where Pinheiro was staying; 77-year-old journalist Win Tin, held since 1989; and members of the 88 Generation Students group, who have been especially active in nonviolent anti-government protests in recent years. Pinheiro did not reveal details of their conversations.

Pinheiro expressed particular sympathy for Win Tin, a top executive of Suu Kyi's party who is believed to be the country's longest-serving political prisoner. He described him as being in high spirits and said his health was OK, though prison for a man of his age "is hell."

He said he would ask the authorities to provide Win Tin with paper and pen, so he could write poetry.

Pinheiro recited a poem Win Tin wrote for him: "Will death be my release. As long as democracy and human rights are not within reach. I decline my release. I prepare to stay."

Pinheiro said had requested a meeting with Suu Kyi, who is under house arrest, but it had not been granted by the government. He held out hope that he could meet her on a future visit.