An 87-year-old retired carpenter was deported from U.S. to Ukraine by federal immigration service for helping the Nazis round up Ukrainian Jews during World War II. 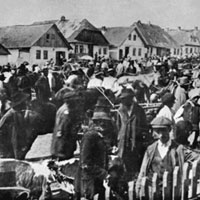 Judge Robert Vinikoor wrote in a five-page ruling that Osyp Firishchak took part in Nazi activities and participated in "conduct contrary to civilization and human decency" as a member of the Ukrainian Auxiliary Police, according to a statement from the U.S. Department of Justice.

Firishchak, who came to the United States in 1949 and settled in Chicago , was stripped of his U.S. citizenship in 2005 after a three-day civil trial. At that trial, Firishchak denied he was ever a member of the Ukrainian Auxiliary Police or that he collaborated with the Nazis. He claimed he was homeless and looking for work in Lviv during the years in question.

His attorney did not immediately return a telephone message left Thursday by The Associated Press.

Firishchak has until Dec. 10 to appeal the decision, said Justice Department spokeswoman Jaclyn Lesch. If he agrees to go, he could be deported in a few weeks, she said.

Officials from the Justice Department's Office of Special Investigations, which researches accusations that people were once Nazis, filed a lawsuit against Firishchak in 2003.

Between 1941 and 1944, Firishchak lived in the city of Lviv and helped Nazis as they arrested Jews in large numbers and sent them to forced labor and death camps, investigators said. Federal officials also accused Firishchak of lying to U.S. immigration authorities about his activities.

Firishchak "played a central role in the murder of more than 100,000 Jewish men, women and children," Eli Rosenbaum, director of the Office of Special Investigations, said in a statement.