A bullied teenage outcast, who launched an indiscriminate killing spree at his school, left asuicide note and hate-filled Internet postings. Police analyzed them searching for clues to what led the teenage to commit this horrible act. 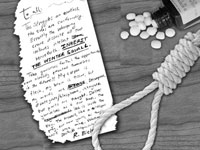 Finns mourned the victims of the school massacre, with flags across the Nordic nation flying at half staff. Grieving students placed candles outside the sealed-off high school in southern Finland, and the president attended a memorial service for the victims in the capital.

Apparently selecting his victims randomly, he killed six fellow students, the school nurse and the principal before turning the gun on himself, police said.

"There's nothing that links him with the victims except that they attended the same school," Detective Superintendent Tero Haapala told The Associated Press.

Investigators gave a chilling account of the mayhem, which started just before noon (1400GMT) and ended two hours later when police found Auvinen in a bathroom near the school cafeteria with a self-inflicted gun shot wound to his head. He died at a hospital a few hours later.

Police found 69 shells at the scene, suggesting Auvinen fired at least as many shots. The victims were shot in the head or the upper body - some with only a few shots, others with almost 20 rounds, Haapala told a news conference.

The killer also tried to start a fire, dousing the floor and walls of the second floor of the school building in a flammable liquid, but failed to ignite it, Haapala said.

Haapala described Auvinen as a "lonely rider" who was bullied by other students. He said the motive for his rampage remained uncertain, "but the explanation can be found mainly in his Web writings and his social behavior."

Police spokesman Goran Wennqvist told reporters that Auvinen left a suicide note at his home before the attack, "saying goodbye to his family" and explaining his hatred toward society. He did not give details.

Police said they also seized books and other printed material that suggested Auvinen had "radical thoughts" and was planning an attack, Haapala said.

Investigators believe Auvinen revealed plans for the attack in postings on YouTube in which he urges revolution and grins after taking target practice.

One posting called for a popular uprising against "the enslaving, corrupted and totalitarian regimes" and appeared to anticipate a violent attack.

"I am prepared to fight and die for my cause. I, as a natural selector, will eliminate all who I see unfit, disgraces of human race and failures of natural selection," the posting said.

Auvinen shot the victims with a .22-caliber Sic Sauer Mosquito pistol, police said, adding that about a dozen other people were injured as they tried to escape from the school.

Police said he belonged to a gun club and got a license for the pistol on Oct. 19. They said he bought the gun days before the attack from a local gun store along with 500 rounds of ammunition.

Auvienen did not have a previous criminal record and came from an ordinary family, police said.

Witnesses described a scene of mayhem in the leafy lakeside community, in which the assailant scoured the school for victims while shouting slogans of "revolution."

On Thursday, grieving students placed candles outside the school, which was still roped off by police tape as forensic experts sought to reconstruct the shooting spree that sent panicked students and teachers fleeing for their lives.

Thursday was declared a day of mourning in Finland, which is unaccustomed to deadly shootings although it has a high rate of gun ownership.

Memorial services were held across Finland including in Tuusula, where a church was turned into a crisis center with experts on hand to comfort grieving residents.

After a service at Helsinki Cathedral, President Tarja Halonen called on Finns to support each other in what she called a day of sorrow for the nation of 5.2 million.