China-made toys seized in Hong Kong were being tested Thursday after scientists in Australia found that similar toys contained a chemical that converts into a powerful 'date rape' drug when ingested, officials said. 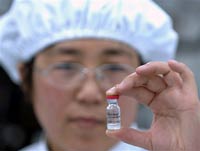 At least five children in the United States and Australia have been hospitalized after swallowing the toy beads, which are used in arts and crafts projects. They can be arranged into designs and fused when sprayed with water.

Australian scientists say a chemical coating on the beads, when ingested, metabolizes into the so-called date-rape drug gamma hydroxy butyrate. When eaten, the compound - made from common and easily available ingredients - can induce unconsciousness, seizures, drowsiness, coma and death.

The toys were sent to a laboratory in Hong Kong for tests, a customs official said, requesting anonymity in line with policy.

The toys are called Bindeez in Australia, where they were named toy of the year at an industry function this year, and in the United States they go by the name Aqua Dots.

Retailer Toys "R" Us said in a statement it pulled all the toy beads from its stores in Hong Kong, Singapore and Malaysia after officials in Australia ordered them off the shelves Tuesday.

A company spokeswoman for Moose Enterprises' Hong Kong office said the production of the toy was outsourced to a mainland Chinese factory. She refused to elaborate and referred all further requests for comment to the company's head office in Australia.

"Our Hong Kong office is only responsible for operations such as logistics and shipping arrangements, we don't have any firsthand information," the employee, who would only give her surname, Lo, told The Associated Press.

Moose Enterprises earlier said Bindeez and Aqua Dots were made at the same factory in Shenzhen, in China's southern Guangdong province. The company said the product is distributed in 40 countries.

The toys were supposed to use 1,5-pentanediol, a nontoxic compound found in glue, but instead contained the harmful 1,4-butanediol, which is widely used in cleaners and plastics.

The U.S. Food and Drug Administration in 1999 declared the chemical a Class I Health Hazard, meaning it can cause life-threatening harm.

Both chemicals are manufactured in China and elsewhere, including by major multinational companies, and are also marketed over the Internet.

It's not clear why 1,4-butanediol was substituted. However, there is a significant difference in price between the two chemicals. The Chinese online trading platform ChemNet China lists the price of 1,4 butanediol at between about US$1,350-US$2,800 (EUR916-EUR1,900) per metric ton, while the price for 1,5-pentanediol is about US$9,700 (EUR6,588) a ton.