The Czech prime minister Mirek Topolanek said Monday that an open discussion of nuclear power is needed, as the country becomes an energy importer. 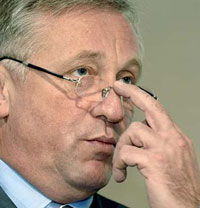 The current policy of the Czech coalition government is to not discuss the issue of nuclear power. The anti-nuclear Green party is key to the coalition's parliamentary majority, and it holds several key governmental positions.

Topolanek said the Greens needed to be a part of that discussion.

Expanding use of nuclear power could reduce the country's greenhouse gas emissions, Topolanek said, but he did not say whether the government would address the issue of expanding nuclear power in the country.

"The Czech Republic has enjoyed a period of a good energy mix, self-sufficient (for electricity production), but that period is ending and we'll become importers of energy," Topolanek said.

He said the government needed to update its energy strategy through 2050, and that a decision to increase power generation from natural gas would increase the country's dependence on gas-exporting countries.

Power company CEZ AS, which is 66 percent owned by the state, is refurbishing its brown coal-fired power plants, but that does not cover the growing electricity needs driven by economic development, Topolanek said.

He said that further use of black coal would not solve energy needs and would lay to waste hopes of lowering carbon emissions.

The Czech Republic currently has two nuclear power plants, the output of which accounts for some 35 percent of domestic demand.